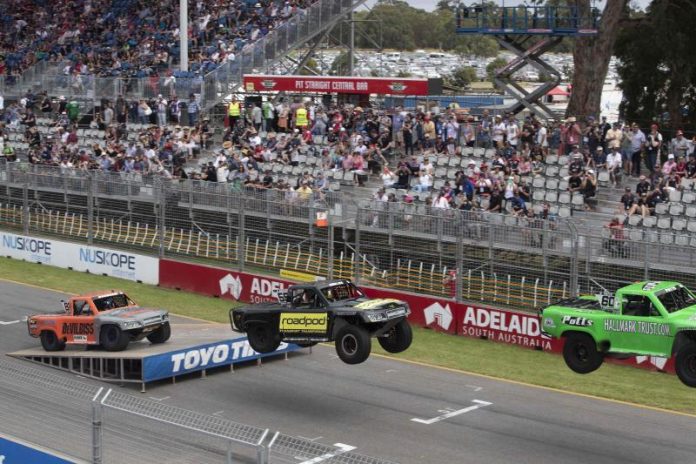 Gone from CAMS and the Gold Coast 600, SST finds a home with AMRS …

THE BOOST MOBILE Stadium SUPER Trucks presented by SPEED ENERGY will join the program for Round 5 of the Australian Motor Racing Series at Sydney Motorsport Park on 26-28 October.

After ongoing issues with CAMS and deemed to be in breach of its safety requirements with the governing body – and thus no longer able to compete on the Gold Coast 600 bill this weekend – the category has done a deal to join the AMRS next weekend.

“Everywhere they go, the Stadium SUPER Trucks pull a massive crowd, and we can’t wait to have them at Sydney Motorsport Park,” Williams said.

“They will put on a spectacular show for everyone watching, whether they’re at the track or viewing the live stream.

“Over the last couple of weeks, it’s no secret that Stadium SUPER Trucks has had to make some last-minute changes to their 2018 schedule, so we’re thrilled to have offered SST a place to compete and add them to our event program.”

The Stadium Super Trucks race format will consist of one practice session, two shootout style qualifiers and two 25-minute races throughout the weekend.

Tickets for the AMRS round will be available at the gate on Saturday and Sunday.

Sunday’s action at the event will be live streamed via Blend Line TV and the AMRS Facebook page; the SST races will also be shown on Facebook Live and on CBS Sports in the USA.