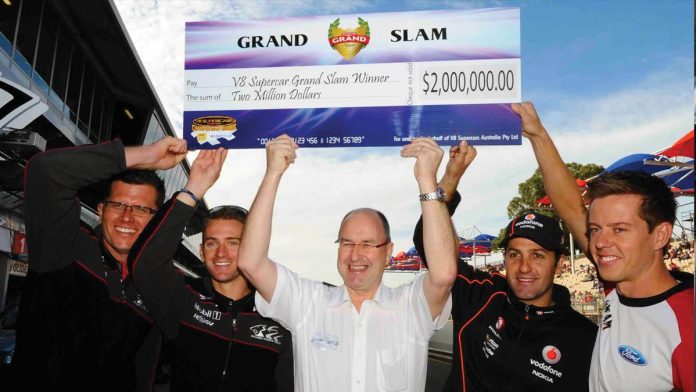 TO MOST Australian sports fans the term ‘Grand Slam’ means tennis, where it refers to the year’s four marquee tournaments including the one currently taking place at Melbourne Park.

It’s also a label kicked around in golf circles, where a ‘career grand slam’ refers to any player who has won each of the majors at least once.

But only the keenest motorsport followers would remember that V8 Supercars also once held its own ‘Grand Slam’… and there was $2 million on the line!

The concept was rolled out in 2010 as part of efforts to increase the status of the Gold Coast race, which had become a Supercars-headlined event following the end of its open-wheel component.

Then Supercars boss Tony Cochrane revealed at the 2010 Clipsal 500 that if a driver won the Adelaide, Bathurst, Gold Coast and Sydney Olympic Park events in the same year they’d score $2 million.

All the action from the 2010 Clipsal 500 is covered in our new book, ‘Sensational Adelaide: An Illustrated History of the Adelaide 500‘, which is now open for pre-order in the V8 Sleuth Bookshop.

The so dubbed ‘Grand Slam’ prize was only open to primary drivers, who for the first time in 2010 were not permitted to pair up for Bathurst, and each event win was based on most points scored over the weekend.

It appeared to draw inspiration from NASCAR’s ‘Winston Million’, which from 1985-97 offered a $1 million bonus to any driver who could win three of the year’s four biggest races.

Under that system if the $1 million was not won, $100,000 would be awarded to the first driver to win two of the races. The main prize was won twice in those 13 years and the lesser prize five times.

The V8 Supercars announcement in Adelaide was good media fodder; a headline-grabbing dollar number and a classic PR photo of Cochrane and the sport’s star drivers fighting over an oversized novelty cheque, pictured main.

But in reality, it was never going to work… and it didn’t. After Adelaide in March Garth Tander was the only driver still eligible to win any money.

It was largely forgotten about until October where Tander failed to win Bathurst and the incentive was gone. Not surprisingly, V8 Supercars quietly admitted in early 2011 that the ‘Grand Slam’ would not return.

In a story in the Adelaide Advertiser confirming there would be no second running, Jamie Whincup applied his own verbal slam to the concept.

“I said at the time it was all a bit of media dribble to be honest,” he said, having joked when the concept was first rumoured that he’d considered personally offering to match the $2 million because no one would win it!

“No one was ever going to win. It was zero inspiration and after Adelaide there was only one guy thinking about it and that was Garth Tander.

“Everyone else was written off after Adelaide, so it didn’t work, and it was never going to work.”

The initial announcement of the ‘Grand Slam’ had pointed out that Whincup went close to achieving the feat in 2008, where he won Adelaide, Bathurst and the Gold Coast and then stumbled at Sydney’s Oran Park finale.

Looking at the entire 2009-16 period in which all four ‘Grand Slam’ events were on the calendar, no driver recorded more than two of the required round victories.

Click HERE to read more tales of the Strange But True!