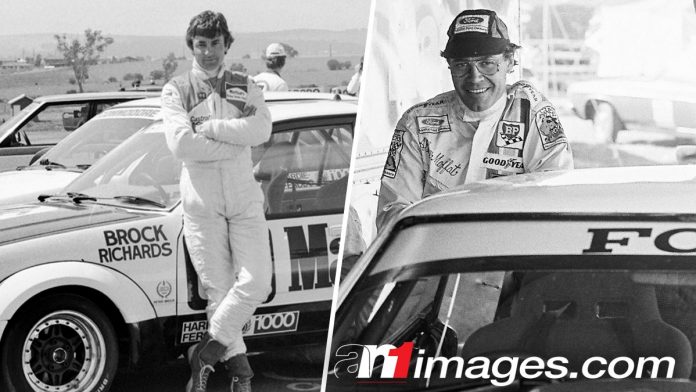 CAR #1 at the Bathurst 1000 has been reserved for Australian touring car racing’s reigning champion for much of the past 50 years.

In fact, with Bathurst usually taking place after the completion of the championship, it was often one of the first times the newly-crowned champion got to carry the champion’s number.

Examples include Peter Brock in 1974, Bob Morris in 1979 (although he and Dieter Quester ended up racing the #7 Ron Hodgson Torana instead) and Jim Richards in 1985 and 1990.

The practice even continued into the V8 Supercars era, with Glenn Seton adopting the champion’s #1 for the 1997 race and Craig Lowndes doing likewise in 1998.

However, there was one year where Moffat carried the #1 having done neither.

Moffat was a very late entry into the 1980 race; he’d largely sat out the year’s touring car races having failed to get a Mazda RX-7 with a peripherally-ported engine homologated, and made a surprise appearance racing for the Holden Dealer Team at the Sandown 400.

He didn’t even appear on the published entry list in the official Bathurst program.

The newly-crowned 1980 Australian Touring Car Champion and reigning Bathurst 1000 winner Brock certainly did; however he elected to stick with his usual #05, leaving the #1 absent from the entry list.

However, Moffat secured a late entry for his hurriedly-built Ford Falcon XD – the last Falcon he’d campaign in the ‘Great Race’ as a driver.

When his yellow machine arrived at Mount Panorama for the race, the doors, bonnet and roof were emblazoned with the #1!

It reportedly caused a bit of consternation and was referenced during the pre-race television coverage, as can be seen on the DVD of the full 1980 Bathurst 1000 which can be purchased in the V8 Sleuth Bookshop.

The rules dictated that #1 could only be raced by Brock while the first available number in the outright class was #13, originally slated for Rusty French and Leo Leonard’s Falcon which didn’t front for the event.

Brock defused the whole situation with a very cheeky concession; per Auto Action’s report of the event, a copy of the following handwritten letter was left pinned to the notice board in the press room on the Thursday before the race:

Just a short note to grant you permission to use the competition number 1. We both know that this number is reserved but really it doesn’t worry me too much and when I heard of the alternative (number 13 I believe) I can understand your desire to use my number.

Please pass this information to Ivan Stibbard as I am sure he’s absolutely chomping at the bit waiting for this vital news.

Yours in motorsport,
Peter Brock

The triumph is depicted among all of Holden’s Bathurst 1000 victories from 1968 to 2018 in the new book Racing the Lion: An Illustrated History of Holden in Australian Motorsport, a 400-page hardcover book paying tribute to the marque’s rich competition history spanning over seven decades.

It’s now in stock in the V8 Sleuth Bookshop – click HERE to order!