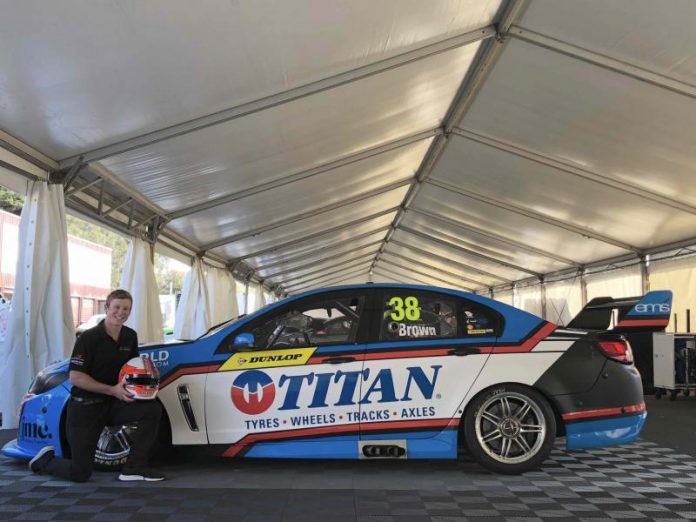 Will Brown gets ‘Titanic’ for rest of season …

STANDOUT Dunlop Super2 Series driver Will Brown and his Melbourne-based Eggleston Motorsport team have confirmed a new sponsor for the remainder of the 2018 series.

Titan Australia has signed as major backer of Brown’s #38 Commodore for the remaining three rounds of the Super2 Series at Sandown, Bathurst and Newcastle.

With 10 locations around the country, Titan Australia is the largest integrated provider and service specialist of tyres, wheels, tracks and axles in Australia.

The company will feature on the bonnet and sides of Brown’s EMS-run Commodore starting this weekend in Melbourne at Sandown in round five of the Dunlop Super2 Series.

The 2017 Mike Kable Young Gun Award winner for best first-year Supercars driver, Brown is currently eighth in the series pointscore and looking to kick start his season at Sandown this weekend.

“We’ve worked really hard on and off the track this year and having the support of Titan Australia is a great boost into the remaining rounds of the series,” says Brown.

“Titan Australia is a new name to motorsport sponsorship in this country but they’re really well known and highly regarded in their line of work.

“We’ve spent plenty of time testing and continuing to hone my approach to driving in the gap since the last round in Townsville in July, so we’re leaving no stone unturned in continuing to find ways to improve.

“My teammate Paul Dumbrell is leading the series so there’s no doubt our EMS Commodores are real contenders in Super2 this year and I want to push my way a bit further up the field in these last few rounds and get among the results too.

“Titan Australia are excited to be partnering Will Brown and the Eggleston Motorsport team for the remainder of the of the 2018 season,” said Nathan McGregor, Marketing Coordinator for Titan Australia.

“We feel supporting Will and this family run team was an easy choice as we share many core values including commitment and quality.

“Titan Australia is committed to providing the highest quality products and services that deliver total customer satisfaction. Combined with our complete product offering and full service capabilities, we truly are the only one stop shop and number one solution provider in our fields.

“As a local company manufacturing Australian made products with Australian steel for Australian conditions we are proud to be supporting a young Aussie driver reach their dreams.”

Brown is in his second season in the Dunlop Super2 Series and will be on ‘double duty’ at Sandown this weekend, as he will make his Virgin Australia Supercars Championship debut in the main Sandown 500 race as co-driver with Anton de Pasquale in the #99 Commodore run by Erebus Motorsport.

The fifth round of the Dunlop Super2 Series will be held at Sandown this weekend from September 14-16 as the main support category of the Sandown 500 event with coverage on both Network 10 and FOX Sports over the course of the weekend.