Home News SUPER2 TEAM GETS INTO RETRO SPIRIT FOR SANDOWN 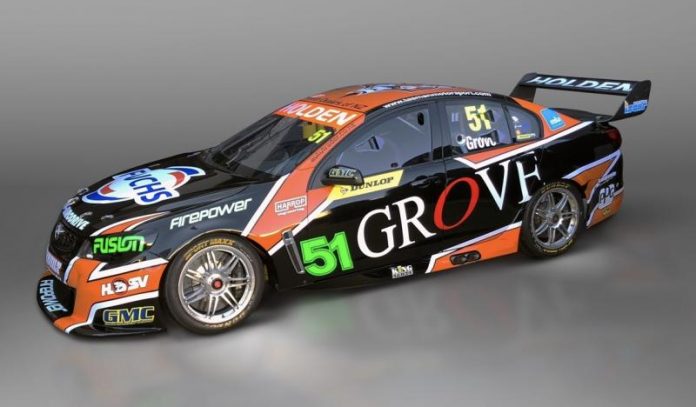 THE Sandown 500 is the retro round of the Virgin Australia Supercars Championship but getting into the retro spirit isn’t just limited to the teams in the main 500-kilometre race.

Dunlop Super2 Series rookie Brenton Grove will adopt a retro look for the supporting round of his series, his Grove Racing Commodore VF to appear as an identical copy of the 2007 Tasman Motorsport Commodore VE from that year’s Oran Park round.

Grove’s relationship with Tasman Motorsport continued following Oran Park through to the end of the 2007 season, before founder Stephen Grove launched his own team in 2012 racing in Porsche Carrera Cup Australia.

The 2018 livery, to be run at Sandown, also features an older version of the Grove logo in order to completely replicate the design that was fielded in 2007.

“It was actually Richo (Steve Richards, Grove’s driver coach) who suggested we do this car, since it was Grove’s first foray into motorsport and also Supercars,” says Grove Jnr.

“I still have this car framed on my wall at home with Murph’s signature.

“It’s pretty amazing how things have gone full circle, from me always supporting Murph to him now commentating on my race (Murphy commentates the Dunlop Super2 Series on television).

“It’s pretty special because he has been a family friend for quite a while now.”