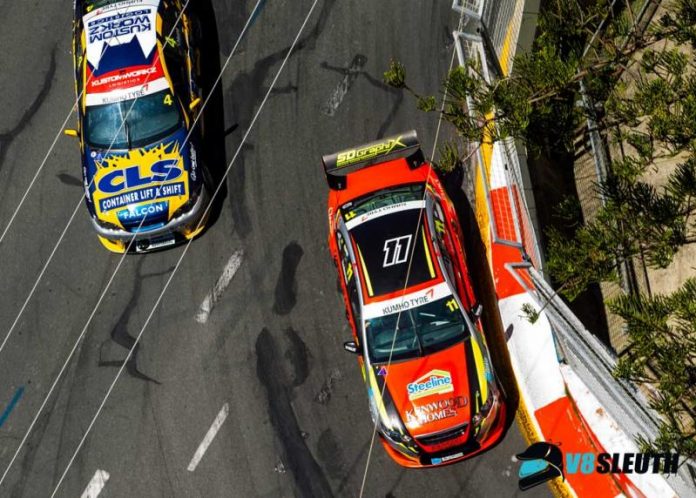 THE Kumho V8 Touring Car Series will be rebranded for 2019 and officially become the third-tier of Supercars racing.

The category will be known as the Kumho Super3 Series from next year onwards, placing it in line as an official feeder category into the Dunlop Super2 Series.

However there will be no changes to management of the category and its operations, which will continue to be handled by respected South Australian motorsport administrators Liam and Rob Curkpatrick.

The 2019 calendar has also been confirmed for the series with four Supercars Championship rounds and a single appearance at the Shannons Nationals due to take place next year.

The first four rounds next year will support Supercars events at Phillip Island (April), Winton (May), Queensland Raceway (July) and The Bend Motorsport Park (August) before Sandown hosts the season finale in September at the Shannons Nationals round.

Each round at Supercars events will be shown live as part of the FOX Sports coverage of those rounds with streaming and to-be-announced free-to-air television coverage of the Sandown round.

Super3 Category Manager Liam Curkpatrick says the new title was the next step in the evolution of the category.

“We have enjoyed a working relationship with Supercars for some time, both as a support category at several of their events and also on a technical and sporting basis,” Curkpatrick said.

“Formalising the arrangement made sense at both ends and it means we can drop the ‘unofficial’ from the ‘unofficial third tier’ tag we’ve had for some time. Having closer ties with Supercars allows us to better promote the series and formalise the place the series has developed on the pathway to Super 2.

“Internally the series will remain unchanged with the same people running the show, a continued relationship with our long-time supporters in Kumho and continuing to work with the great competitor base we have built over a decade of racing.”

There will be no changes to the eligibility of cars with the pre-Car of the Future Commodore VE II and Falcon FG the latest models permitted in the category.

The category will also continue to race on a 17-inch Kumho tyre with a move to 18-inch rubber due to occur for racing in 2020.

The Kumho V8 Touring Car Series was created in 2008 on the Shannons Nationals bill as a category where ex-V8 Supercars no longer eligible for the ‘main game’ and development series were able to compete.

A total of 57 rounds and 171 series races have been held since the category’s debut at Mallala in 2008.

Click here for more information on the Kumho Super3 Series.