Home News SUPERCARS 2021 TV LINEUP: WHAT YOU NEED TO KNOW 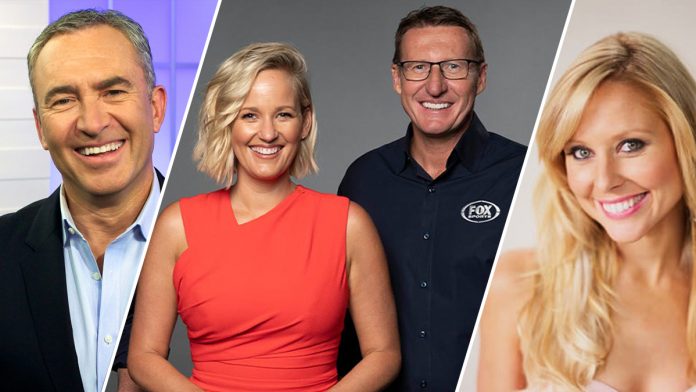 After months of negotiations, including a spectacular backflip over Mark Larkham’s involvement, Supercars’ full lineup of television talent for 2021 has been confirmed.

A new broadcast deal that includes the Seven Network taking over from Network Ten as the category’s free-to-air partner has triggered some key changes.

V8 Sleuth breaks down the lineup, starting with the main roles…

Fans will be relieved to learn that Neil Crompton has been retained as lead commentator, again joined in the box by Mark Skaife – who has been a key part of the broadcasts since 2009.

Jess Yates will also return as host, although may miss the third event in Tasmania while giving birth, and Craig Lowndes is again part of the team but in a revised position.

Lowndes has been used at the hosting desk and in pit lane over the last two seasons but will instead be “unleashed” in new areas, as detailed in our separate story.

The big addition is Garth Tander, who will be introduced to the team this year in a multi-faceted role ahead of a possible progression to a main commentary position in future.

Tander’s 2021 learning year is set to include some time in the main commentary feed, likely in place of Skaife for selected sessions late in the season.

He’ll also try his hand at support race commentary alongside Chad Neylon, in particular in Super2, and rotate through pit lane and work on a variety of colour stories.

Rising broadcasting star Neylon will also get a run in pit lane this year at the events not simulcast on Seven.

Larkham is of course also back, although his role remains only loosely defined.

He’s scheduled to tackle technical explainer segments for the broadcast and Supercars’ digital platforms but is not expected to be as prominent in pit lane as he was in 2020.

Are there other new faces?

Robinson is part of Supercars’ push to appeal to a wider audience and will be a pit lane and colour reporter at all events. Beretta will be in pit lane at Bathurst and will also perform Seven hosting duties.

Champion Australian rally driver Molly Taylor has also been introduced to the mix, but at this stage is only confirmed for the Bathurst events in February and October as she juggles other commitments.

Seven is looking to make a particularly big splash at the season-opening Mt Panorama 500, so will be rolling out its full artillery for that event.

They have been deployed so that Seven can produce some of its own segments at the season-opener, rather than simply take the main feed produced in-house by Supercars.

Whether that also occurs at further events is yet to be determined.

Like Ten in recent years, Seven will broadcast six of the season’s 12 events live and highlights packages of the remainder, while Fox Sports carries every session live.

So far Seven’s confirmed live events are the Mt Panorama 500, Bathurst 1000 and season-ending Gold Coast 500, with discussions ongoing as to the full schedule.

Townsville and at least one of the two night races, scheduled for Sydney and Perth, are likely to be among the other three.

So who’s out of the line-up?

Crehan announced after Bathurst last year that she had been let go and has subsequently picked up a new role on the coverage of the Australian Superbike Championship.

The New Zealand-based Murphy was absent throughout the bulk of 2020 due largely to travel restrictions brought about by the COVID-19 pandemic.

At the moment it’s hoped he can return to pit lane for the Bathurst 1000, as well as featuring in the broadcast of the Auckland event, should it take place.

Jones is a casualty of the influx of new talent, while popular support category caller Matt Naulty has also been left out of the announced lineup.

What else is new?

Supercars has promised a fresh and bespoke graphics package for 2021 to coincide with its new broadcast agreements.

Previously, the graphics have largely been dictated by the rights holders, and this change is said to allow Supercars to create its own look and feel.

Supercars has also confirmed its Inside Line television series will return during the mid-year break, airing episodes shot following Walkinshaw Andretti United in 2020.

The inaugural series followed Erebus Motorsport in 2019 and aired during the COVID-19 shutdown last year.

And in a win for V8 Sleuth followers, Supercars has also revealed it is in discussions over the use of historical footage from the Seven archive thanks to its return to the network.

Although the details of how that will work with Fox are still being determined, we’ve been told to “expect some new products that will include some of that great Seven archive from pre-1997”.

Supercars this week announced plans to put its own archive, from 1997-2014, on YouTube for free. Over 180 races have already been uploaded.