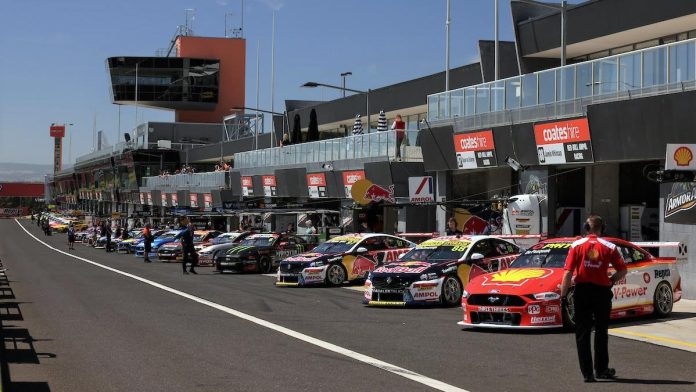 SUPERCARS has confirmed its intention to introduce the Gen2 Ford Mustangs and Holden Commodore ZBs into the Dunlop Super2 Series next year.

The move will be made to coincide with the introduction of the new Gen3 Chevrolet Camaros and Ford Mustangs into the Repco Supercars Championship.

Gen2 cars won’t be allowed to continue in the main game alongside their Gen3 successors, meaning teams will be looking to offload their Gen2 Mustangs and ZBs.

Super2 has run the ‘Car of the Future’ specification cars since 2016 and is currently battled out between the VF model Commodores, FG X Falcons and Nissan Altimas.

While Gen2 is a logical progression for Super2, the cost of the newer machinery and their speed advantage over the current cars are clear issues for the second-tier category’s existing car owners.

Addressing media at the Repco Mount Panorama 500, Supercars CEO Sean Seamer affirmed the plan to graduate Gen2 cars to Super2 but stressed the details are still being worked through.

“That’s something that we’re looking at right now,” Seamer said. “How do we manage the cost so that they’re suitable for Super2?

“The cost challenges associated to the category for us are around usage and kilometres and Super2 don’t do as many kilometres obviously, however it’s incumbent upon us to do whatever we can for the Super2 competitors to manage the costs as well.

“We are working through that at the moment… we need to get it ready for next year.”

Adding to the equation is the question of when the existing Super2 cars will move down into Super3, for which eligibility currently cuts off at the end of the Project Blueprint era in 2012.

The Super2 and Super3 classes run in the same races, but the latter category is managed by the Australian Racing Group, rather than Supercars.

Seamer says having Gen2 cars battle it out with the current Super2 machinery under a parity system is on the table.

“Do the existing [Super2] cars potentially stay in Super2 or go down to Super3? The mechanics of that are under consideration at this point in time,” he said.

“Under consideration is potentially paritising the current Super2 cars with the cars that are coming down [Gen2], because the engine and brakes are largely the same.”

A 28-car combined Super2/Super3 field has assembled for the opening round of the 2021 season this weekend at the Repco Mount Panorama 500.