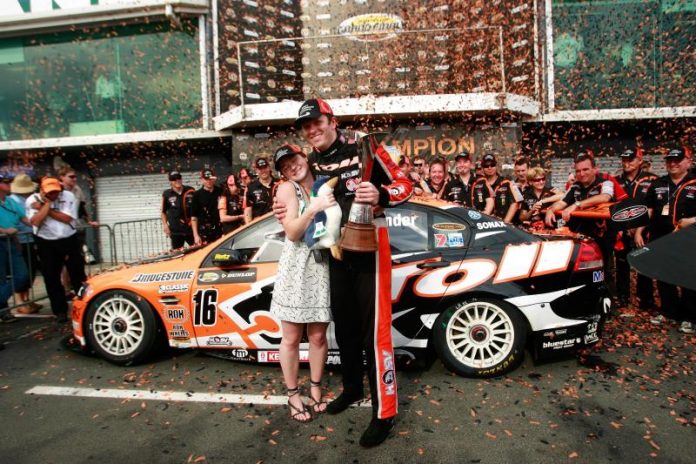 It’s nearly a decade since Garth Tander won the Supercars crown. What happened to his winning car?

GARTH Tander will set an impressive record at this year’s Castrol Gold Coast 600 when he racks up his 250th round start in the Virgin Australia Supercars Championship.

The Holden Racing Team ace will become just the third driver to achieve the feat after Russell Ingall and Craig Lowndes, but Tander will become the first to start 250 rounds exclusively in Holdens.

Tander won the 2007 V8 Supercars Championship driving for the Toll HSV Dealer Team and is out of contract at the end of this season.

Which got us thinking – we should tell the story of his championship-winning VE Commodore!

Built new in 2007 by Walkinshaw Racing, chassis WR004 was Tander’s #16 Toll HSV Dealer Team Commodore right throughout the season, debuting at the Clipsal 500 in Adelaide that year.

It won the Barbagallo and Queensland Raceway rounds overall and by the end of the season had won 15 of the 37 championship races held that season.

It was driven to fourth place at the Sandown 500 by Tander and Craig Baird, but retired at Bathurst when Paul Radisich paired with Baird in WR004 and Tander joined Rick Kelly in the team’s #1 car for the weekend.

As it turned out, both cars were crippled by brake problems and both failed to finish.

Tander took it back after the enduros and eventually wrapped up the title at Phillip Island, two points clear of Jamie Whincup.

For 2008 it was retained by the HSV Dealer Team (the Toll sponsorship moved across to the Holden Racing Team along with Tander) and it became the #16 Autobarn car driven by Paul Dumbrell from the start of the season onwards.

He was joined by David Reynolds at the L & H 500 at Phillip Island and then again for Bathurst, however when Radisich crashed in Saturday morning practice, Kelly was moved into the #16 car with Dumbrell for the race.

Driven by Dumbrell for the remainder of the season, save for the Oran Park series finale when he debuted a brand new car.

This chassis became a spare at Walkinshaw Racing in 2009 before being sold to Lucas Dumbrell Motorsport for 2010 and driven in the first half of the season by Daniel Gaunt.

Cameron McConville drove it at Townsville, Mark Noske and Nathan Pretty teamed up at Phillip Island and Bathurst and American Scott Pruett joined Pretty for the Gold Coast.

Warren Luff was signed to drive the car for the rest of the season and he continued into the 2011 season in what was largely an unsuccessful season for team, driver and car.

The #30 Gulf Western Oil Commodore was also tested in 2011 by James Courtney at Winton as the team worked to improve its overall performance.

In 2012 it appeared in Adelaide in the Dunlop Series round with Kristian Lindbom behind the wheel and then was used by Minda Motorsport at Bathurst later that year as the Shannons Supercar Showdown entry of Cameron Waters and Jesse Dixon.

It was eventually sold to businessman Terry Smart and has been restored to its 2007 Tander/Toll championship winning livery and specification.

Sometime ago the V8 Sleuth asked Garth Tander if he had a choice, would he buy back his 2007 title-winner or his first Bathurst-winning Valvoline/GRM Commodore from 2000?

“I’d probably go the ’07 car because it was the first year of VE and really winning so many races that year and the title coming to the wire and stealing it again in the final round at Phillip Island make it a special one,” he told us a few years back.

“Also, only because I know Garry Rogers still owns the 2000 Bathurst winning car and he’s a used car salesman and it would be far too hard to do a deal with Garry!”