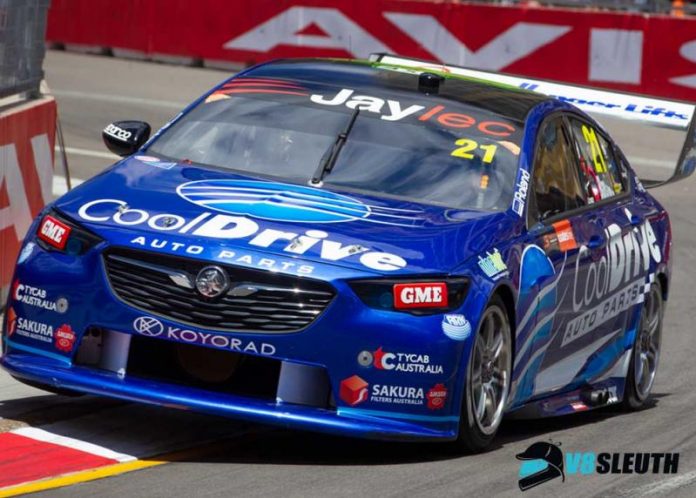 MACAULEY Jones will make the step up full-time to the Virgin Australia Supercars Championship in 2019, taking over the reins of the Team CoolDrive Holden.

“There is so much to look forward to in my first Supercars season,” Jones said.

“The amount of time I get to spend racing will double, and so will everything else, the workload, the off-track commitments; I’m ready to step up. I’m excited to be working with the team at the next level.”

The 24-year-old was in contention for the 2018 Super2 title until a series of unfortunate incidents cost him three likely victories, including a pair of suspension failures at the Townsville round, plus his last-lap heartbreak at Bathurst where contact from Garry Jacobson pushing him into the gravel at the Chase on the final lap.

“The 2018 season has been incredibly tough for me, I’ve grown a lot as a driver and a person,” he said.

“We’ve had a few times this year where we’ve had an average result after a promising start, such as Townville and Bathurst; and it’s hard to bounce back from that. If the consistency and race finishes were there it could have made a big difference to our end of season result, but you try not dwell on that any more than you need to.”

Jones has already put 23 races in the main game under his belt. He spent the last four years as an Enduro Cup co-driver at BJR, taking a best race result of sixth place on the Saturday at this year’s Gold Coast 600 with Nick Percat, and taken part in a handful of wildcard races across the past two seasons.

“The wild card and co-driving events have definitely helped me prepare for the year ahead,” he said.

“You get a taste of what to expect and how to manage yourself and the car in the longer races; its daunting and exciting all at the same time, but I’m so looking forward to 2019!”

Jones will replace Tim Blanchard, who has raced the #21 car out of Brad Jones Racing for the past three seasons but announced in October that he would end his full-time Supercars career after the 2018 Coates Hire Newcastle 500.

“In the last three years I’ve spent with BJR, I’ve seen the growth and development of Macauley, both as a person, and a driver,” Blanchard said.

“Not many people get to see the work Macauley does behind the scenes, if he’s not working on his own Super2 car he’s usually spending time working on his health and fitness. He’s got an incredible work ethic and is committed to doing the absolute best job he can.”

The announcement reduces the number of vacant seats on the 2019 Supercars Championship grid by one, with Tickford Racing, Kelly Racing and TEKNO Autosports yet to confirm their full driver lineups for next season.