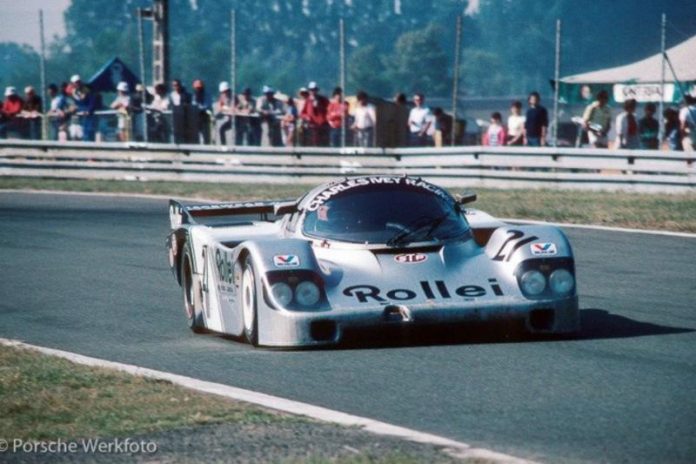 A FORMER John Fitzpatrick Racing Porsche 956 sportscar driven by Allan Grice in his Le Mans 24 Hour debut in 1984 is heading to auction next weekend in the United States – with a price tag tipped to top AUS$7 million.

The car is among those being offered here in the Porsche 70th Anniversary Auction held by RM Sotheby’s at the Porsche Experience Centre in Atlanta next weekend (October 27).

Originally a John Fitzpatrick Racing car, this particular 956 (chassis 956-110) was one of nine privateer cars built by the factory and was raced in the 1983 Le Mans classic by Fitzpatrick himself along with Dieter Quester and David Hobbs (all three being Bathurst 1000 competitors in fact!).

The car also won the Brands Hatch 1000km race in ’83 (with Fitzpatrick and Derek Warwick) and the Can-Am Road America race that year, making it the only 956 Porsche to compete and win on American soil in period.

But its main Aussie link came in 1984 after Lord Paul Vestey had purchased the 956 with Grice sharing the driving in the Rollei Cameras-sponsored car with Chris Craft and Alan de Cadenet in Gricey’s Le Mans debut.

Run by Charles Ivey of London, the car retired on Sunday morning after rising as high as 11th place in the field – and that was its final race.

The Porsche he drove in 1984 was then rebuilt and returned to its 1983 Le Mans JDavid livery (which it is being offered for sale in).

It was sold soon after to a Californian enthusiast before being acquired by an English Porsche collector in the early 2000s.

“The 956 model was a highly successful sports racing car and is considerably rarer and more user friendly than its Group 6 sister car, the iconic 917.

“Given that the car was raced by one of just two privateer teams to ever beat the works Rothmans team with a 956 in a 1,000 KM championship race, and the only 956 to win in the U.S., it is especially fitting that the car be offered at the Porsche Experience Center Atlanta during the 70th anniversary year.

“This is a rare opportunity for Porsche racing enthusiasts that won’t soon repeat itself.”