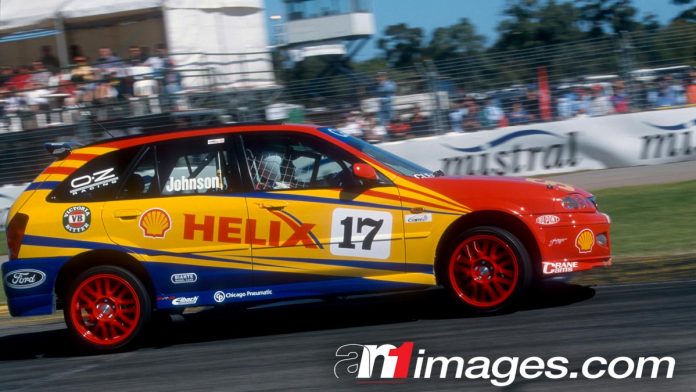 After the success of the Celebrity Challenge concept at Adelaide’s Australian Grand Prix events between 1985 and ’95, it was no surprise that a similar format was tried at the Clipsal 500.

In 2001 and ’02, a field of female celebrities took to the Adelaide Parklands Circuit in Ford Laser SR2s, each sporting the livery of one of the marque’s V8 Supercars.

ONE WEEK ONLY: V8 Sleuth’s Mad March sale on now!

SKAIFE’S ADELAIDE MIRACLE: Supercars races won from 17th and beyond

It came at a time when Ford and its recently installed CEO Geoff Polites was throwing plenty of money at motorsport, pumping millions of dollars into the V8 category.

The Celebrity Challenge features in V8 Sleuth’s new book, ‘Sensational Adelaide: An Illustrated History of the Adelaide 500’, which is available to pre-order now in the V8 Sleuth Bookshop.

The Clipsal 500’s Celebrity Challenge wasn’t always going to be an all-Ford affair however, as the original concept had intended for the field to be half-filled with the rival Holden Astra.

Holden though pulled out when it became clear Ford was allowed to use its new 2.0-litre SR2 variant, which boasted a clear performance advantage over the 1.8-litre Astra.

“We can understand them wanting to promote their new model, but that no longer presents a level playing field,” Holden motorsport manager John Stevenson told GoAuto at the time.

“Even with the varying driver skill levels, we have no interest in seeing eight Astras trail home eight Lasers.”

Ford though insisted its agreement to participate had always been around promoting the 2.0-litre Lasers, which were new to the marketplace and in need of exposure.

The Blue Oval provided 14 SR2s for the 2001 event, to be driven by an array of celebrities headlined by Natalie Lowndes, the then-wife of Craig, and Jill Johnson, wife of Dick and mother of Steven.

Training took place at both Mallala and Adelaide International Raceway, with each celebrity coached by their V8 Supercars counterpart.

Lowndes ultimately proved the quickest, scoring pole at the Adelaide street circuit by nearly two seconds on Saturday and leading every lap for victory in the five-lap race on the Sunday.

“It was nerve-wracking being out there,” Jill Johnson recently recalled to V8 Sleuth.

“The funny part was Steven, Dick and Craig hanging over the fence, giving us the big ‘go faster!’

“Nat was the quickest and in the race I had to let Tatiana go. I’d seen her eyes in the mirror and was like ‘oh God… she’s going to hit me!’”

Johnson’s main memories from the experience though are the fun that was had and the camaraderie between the celebrities.

“We met a lot of really great girls. We used to go out for dinner and just had so much fun,” said Johnson.

“They had us staying in the best hotel in Adelaide and the whole thing was done pretty well.

“We did autograph signings too which was quite weird, but we did what we were told!”

Johnson scored pole and finished second to Lowndes when the Celebrity Challenge returned in 2002, after which both the Laser model and the race were discontinued.

Johnson’s Laser is retained by DJR and occasionally displayed at the team’s workshop museum.

While Adelaide 500 organisers repeatedly brought in new support categories to freshen the event over the years, a Celebrity Challenge never returned.