Home News THE BACK STORY OF BTCC’S UPSET GBP250K WIN 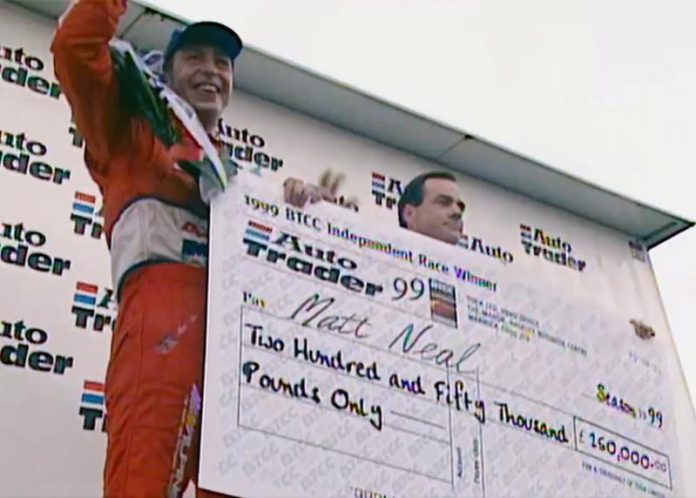 Not only did he score both his first and his family-run Team Dynamics’ first British Touring Car Championship race win, he also claimed a one-off bonus of GBP 250,000!

The huge incentive – equivalent to almost AU$800,000 in 2019 – had been put up ahead of the 1999 season by BTCC chief Alan Gow to any privateer team that could snatch a race victory from the dominant factory squads.

Two decades on, Neal shared withV8 Sleuth the back story to the upset triumph, the tribulations that followed before he could cash the cheque, and his pursuit to purchase the history-making car.

THE CAR
The car Neal raced was actually the same chassis he shared with Steven Richards at the previous year’s AMP Bathurst 1000, built up out of a test car previously used by Nissan’s factory BTCC squad. The pair fought for the win all the way to the final lap of the race, Neal and Richards taking the chequered flag in second … moments before the engine seized!

Team Dynamics were allowed to keep using the car once it returned to the UK for the 1999 BTCC season – the first time the private operation had competed on an equal footing with the big teams courtesy of a rule change that forced tyre companies to make their top-quality rubber available to all.

“We all look back at the Super Touring era through rose-tinted glasses, because it was an incredibly unfair period,” Neal told V8 Sleuth.

“Because of the speed of development and the tyre war that was going on, I can remember some years as an Independent or Privateer driver where you weren’t allowed the same tyres as factory cars.

Neal qualified on the front row for the 1999 season-opener at Donington Park on April 5, but bogged down on the start of the sprint race and fell to fifth.

He made no such mistake from pole position in the feature race, although stalling during the mandatory pit stop meant he had to pass four cars to claim his remarkable upset win – and the massive cheque for GBP250,000 from a grimacing Gow.

THE FALLOUT
That’s not quite where the story ended for Neal, who had to pass a few more tests before he and the team could enjoy their record pay day.

“But what he forgot to tell the insurance company was that he was changing the rules: for the first time ever, the privateers would have the same tyres as the factory cars.

“And at the first meeting we won. The insurance company weren’t happy!

“I had drug tests, everything after that. What they could do, which was mandatory from the insurance company, was that they could do a 72-hour strip. They’d strip the car into a million pieces. Then at the very next race I was drug-tested, everything.”

The winning car was raced by Team Dynamics through the remainder of the 1999 season, and made a cameo return at the 2000 season finale after Neal crashed his regular car.

THE HUNT TO BUY THE CAR
Given the sentimental history attached to the chassis, the team tried to keep it after its racing days had finished.

“The cars were so expensive, they were half a million pounds to build back then,” Neal explained.

“We could never afford them, we just used to have a year-old chassis and we used to rent it off Nissan.

“We tried to buy (the bonus-winning car) but they wanted too much money, and we couldn’t afford it. So they sold it to a guy who collects cars.”

Neal had another opportunity a decade later, after the collector ran into trouble with the tax man.

“The tax office seized it and were putting it all to public auction,” he said. “Then two days before the auction, some buyer from New Zealand came in and bought the lot. And they wouldn’t tell us who the buyer was.

“By the time we knew it, they were all on the boat on the way to New Zealand. So I tracked it down about a year or so later, and it had been sold to someone else in New Zealand, and he wanted GBP22,000 for it.

“It was a time in my life where I’d just got split up with my wife and I was absolutely skint. I thought, ‘well, if I buy it I’ve got to go down there and look at it, and then I’ve got to ship it back … do I need it? No I don’t.’ And I walked away.”

But he didn’t walk away from trying to buy the car for good.

“I got a drive a year after with Vauxhall and then the Honda thing started and I was starting to get some money started coming back in, so I rang him back and said ‘right, I’ll buy that car now,'” Neal explained.

“So I tracked it down in Malaysia and the guy wanted GBP50,000 for it! So I’m arguing with him about it, and after a year he decided he didn’t want to sell it.

“So it’s still in Malaysia somewhere. I think it’s in a good home.”