Home News THE BACKSTORY OF BATHURST’S MOST INFAMOUS PODIUM 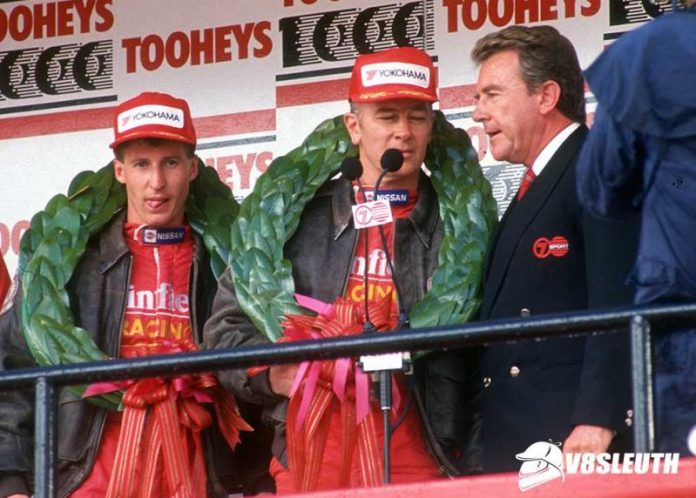 THEY are five words that will forever be linked with Supercars great Jim Richards: “You’re a pack of a***holes.”

We’ve all seen the highlight reel from the 1992 Tooheys 1000, well, a thousand times. Richards crashed the leading Nissan GT-R in a sudden cloudburst, but the race had been red-flagged due to a succession of other accidents around the Mountain.

The rules of the time dictated that the race could not be restarted, and the final results were wound back to the lap prior to the red flag being waved, reinstating the Richards/Skaife Nissan as the winner.

The crowd didn’t like it; Richards liked the crowd’s booing and jeering even less.

Skaife joined Greg Rust’s podcast Rusty’s Garage in an edition released on New Year’s Day, and the Supercars Hall of Famer-turned-FOX SPORTS commentator shared his story of the build-up to the most heated podium ceremony in this history of the Bathurst 1000.

But not before revealing that the race-ending crash wasn’t the first bingle the winning Winfield Nissan GT-R had been in that day.

“It was such a wild day,” he told Rusty’s Garage. “We talk (now) about rain-outs and bad conditions, but man, was it bad that day. I mean it was just hosing with rain.

“It rained so hard that at one stage I actually ran into the back of the Safety Car in the race!”

A pall of tragedy had been cast over the race long before its red-flagged conclusion.

Denny Hulme, the 1967 Formula 1 world champion and veteran of one of the most dangerous eras of motorsport worldwide, died from a heart attack during his first stint behind the wheel of the BMW M3 he shared with Paul Morris.

“Jim was good mates with Denny,” Skaife explained. “And Jimmy knew. People had told him prior to getting into the car for that next stint that Denny had passed away.”

A sudden downpour with less than 20 laps to go sparked chaos, most of the field immediately heading to pit lane for wet tyres.

The leading #1 GT-R was not among them.

“Neil Crompton, driving (the team’s second GT-R) with Anders Oloffson, had come in and put wets on, and Jimmy had to hold for another lap, so he was caught on slicks,” Skaife said.

“He came out of the Cutting and up around the little kink and just went straight into the fence on the left-hand side.

“I’ll always remember his face when he came down. He was just so despondent.

“The red flag had come out and everyone was speculating as to what had just unfolded. Jim wasn’t really concerned about that at the time. He was white-faced and sombre, and obviously disappointed about what had happened.

“He wasn’t hurt (physically), but he was really hurt by what had gone on.

“And then the elation … you couldn’t have got two bigger polar opposites. This distraught figure who, in a nanosecond, was told that he was the winner of the race. I’m shaking hands with him, the team’s erupted, the whole thing.”

That elation was not shared by the crowd waiting beneath the podium. Richards and Skaife were the last of the top three to come out. The third-placed pairing, Crompton and Oloffson, copped a similar reception to their teammates. While the Swede smiled and said he was impressed with the crowd’s passion, Crompton gave them the finger.

Neither did second-placed Dick Johnson and John Bowe, the former further stirring the crowd by expressing his disbelief that “you could be beaten by a crashed car.”

Then it was time for the winners to greet the mob – and Skaife nearly came prepared.

“The backstory is that we got to the bar and got the Tooheys Top Gun jackets, and I started to fill my pockets with beer cans,” Skaife explained.

“Then we walked out, and the reaction was just incredible. It was so bad … for a sporting contest, to have the crowd react like that after one of the most dangerous days of all time, you’d reckon you’d basically applaud the winner and celebrate what was a pretty wild day.

“In the end, history tells us that wasn’t the case.”

“I was shocked! He’s very calm, and you don’t get the title of ‘Gentleman Jim’ for no reason. He’s normally a very calm guy, but he was really affected by that reaction.

“In the end, it was very much a betrayal of Jim’s sporting endeavours. Jim loves – and continues to love – car racing. One of the best drivers of all time. On a day where his mate had passed away, and all the emotion around all that.

“I think, in the end, he was just disappointed by what should have been a really momentous occasion (but) it turned into a disaster – and he gave them a spray.

“And I reckon he’d do it again tomorrow.”

In a long and wide-ranging chat, Skaife also opened up about his sudden purchase of the Holden Racing Team and the pressures it came with, his uncanny knack for badly damaging his dad’s road cars while he was a teenager, and the time he made a mega start to a Formula 3000 race in France only for the steering wheel to come off in his hands!

Click HERE to listen to the Mark Skaife episode of the Rusty’s Garage podcast.