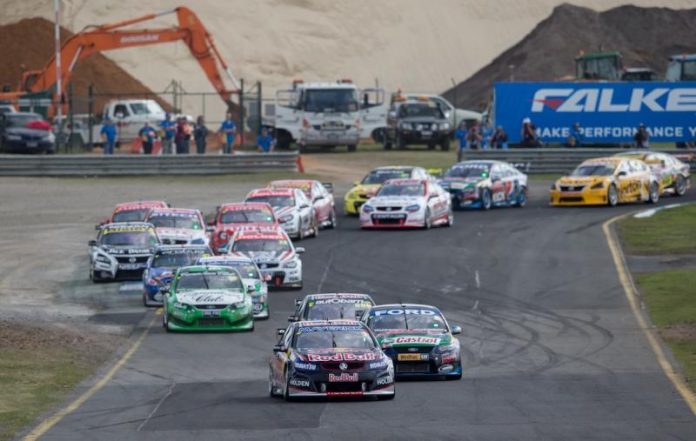 KEEN V8 Supercar fans will know that the V8 Sleuth used to put together a large file in Chevron Publishing’s ‘The Great Race’ annual Bathurst book covering the history of each car in the Supercheap Autp Bathurst 1000.

This ran from 2000 onwards, but since that book was discontinued after 2011, the Sleuth ran a copy of the inventory on the V8 Supercar website last year and this year is keeping the tradition alive here on the V8 Sleuth site.

Given all 29 cars on the grid at Bathurst are all there for the first time under the new ‘Car of the Future’ regulations, there’s obviously no ‘years and years’ of history in each of the cars.

However, some have some quirky facts and bits of information that you may not have known, so the V8 Sleuth has assembled a shorter version of the file for the eagle-eyed V8 Supercar fans to know who is racing what on the Mountain in 2013.

And there’s also chassis numbers listed for the true hardcores – after all, that is the Sleuth way!

#1 Jamie Whincup/Paul Dumbrell
Red Bull Racing Australia
Holden Commodore VF
888A-037
Nicknamed Elizabeth and debuted with victory at the Sandown 500. it’s the first new car debuted after the initial 28 cars that debuted at the Clipsal 500 at the start of the year.

#2 Garth Tander/Nick Percat
Holden Racing Team
Holden Commodore VF
WR 019
The latest-built Commodore from Walkinshaw Racing, though they do have another chassis under build in Melbourne that is yet to be completed and hit the track. This was the fourth COTF-spec chassis built by the team and has featured a range of different livery modifications during the year.

#3 Tony D’Alberto/Jonny Reid
Team Hiflex
Holden Commodore VF
WR 018
The only customer car produced by Walkinshaw Racing so far. It was actually debuted late last year in VE II panels before being re-skinned as a VF for 2013. It’s D’Alberto’s first Bathurst Holden since 2010.

#4 Lee Holdsworth/Craig Baird
IRWIN Racing
Mercedes-Benz AMG E63
SBR24-EM02-2013
A nice touch from Erebus Motorsport with their cars for this season, featuring Stone Brothers Racing designations in their chassis numbers.
This car is ’24’ because it’s the 24th car built since SBR began as Alan Jones Racing in 1996.
Car nicknamed ‘Freyja’ by team boss Betty Klimenko after the goddess of love – she would have loved the fact it became the best-finishing Mercedes-Benz in ATCC/V8SC history at Sandown with its fourth place!

#6 Will Davison/Steve Owen
Pepsi Max Crew
Ford Falcon FG
FPR 1216
The fourth COTF commenced by FPR in 2012 and finished at the end of last year. Has been driven by Davison all season, including taking Ken Block for a hot lap at the Clipsal 500.

#7 Todd Kelly/David Russell
Jack Daniel’s Racing
Nissan Altima
KR004
This is the fourth Nissan Altima constructed by the factory team and allocated to Todd given he was the last driver that was able to drive the car following his shoulder surgery from late last year.
It missed the Sydney Motorsport Park test day and had a shakedown at Winton before going to the Clipsal 500.

#8 Jason Bright/Andrew Jones
Team BOC
Holden Commodore VF
BJR 001
The first COTF car built by BJR and initially had its shakedown in VE II panels. The MoTec system is something different for the team, which has used Pi Research systems for the last few years.

#9 Maro Engel/Steven Johnson
SP Tools Racing
Mercedes-Benz AMG E63
SBR23-EM01-2012
This was the first completed Mercedes-Benz AMG V8 Supercar and was actually the car that ran in black livery that was snapped in ‘spy pics’ taking part in V8 Supercars aero test before it was launched.
This car was nicknamed ‘Thor’ by team boss Betty Klimenko after the hammer-wielding god of thunder!

#10 Andy Priaulx/Mattias Ekstrom
Xbox One Racing
Holden Commodore VF
888A-030
The first COTF chassis completed by Triple Eight, this was the car that was unveiled in special camouflage livery mid-2012. It has been used as a team ride car before making its racing debut at Bathurst as a wildcard entry in green livery.

#12 Tim Blanchard/Ash Walsh
Wilson Security Racing
Ford Falcon FG
DJR FG19
This car has run under #17 all season and was the second COTF completed by DJR. It spent a day at Pace Innovations being repaired after Walsh’s Sandown shunt that put the team out.

#14 Fabian Coulthard/Luke Youlden
Lockwood Racing
Holden Commodore VF
BJR 002
This car was actually completed early in 2013 and made its shakedown debut in BOC panels with David Wall driving – talk about a mixture of team elements! It’s been nicknamed ‘Tallulah’ by Coulthard, in honour of a line from the ‘Cool Runnings’ movie about the Jamaican bobsled team at the 1988 Winter Olympics.

#15 Rick Kelly/Karl Reindler
Jack Daniel’s Racing
Nissan Altima
KR 002
This was the second COTF chassis built by Nissan Motorsport and was the second car completed. It was the highest finishing of the non-Holden or Fords in the first race in Adelaide too and was tested by German Michael Krumm at Winton in August.

#17 Chaz Mostert/Dale Wood
Wilson Security Racing
Ford Falcon FG
DJR FG18
This is actually the first DJR Falcon carrying a DJR chassis reference since the last time the team built a new car in 2005 – their cars since have been Triple Eight-constructed chassis.
This car was actually first shaken down by Steven Johnson – the only time he’s run a DJR car in 2013! It will run under the Greens’ Tuf livery at Bathurst – really looking forward to seeing how it looks!

#18 Alex Davison/John McIntyre
Team Jeld-Wen
Ford Falcon FG
FPR 1212
This was actually the first COTF chassis built by FPR but was the fourth and last one completed as a race car.

#22 James Courtney/Greg Murphy
Holden Racing Team
Holden Commodore VF
WR 017
Debuted late last year in black livery under the #66 at a Winton shakedown day before being re-skinned from VE II to VF for Courtney to drive this season.

#33 Scott McLaughlin/Jack Perkins
Fujitsu Racing GRM
Holden Commodore VF
GRM VF14
This was the first GRM COTF chassis built and was shaken down in October last year by Greg Ritter. It became McLaughlin’s car once re-panelled as a VF for 2013. The young Kiwi threw open naming his car to fans via social media and the name ‘Lola’ was settled on.

#47 Tim Slade/Andrew Thompson
Heavy Haulage Australia Racing
Mercedes-Benz AMG E63
SBR25-EM03-2012
This car was the third completed COTF race car produced by Erebus but the fourth chassis given the original chassis produced by SBR late in 2012 was built as a Falcon and has only been tested before being disassembled.
This car is nicknamed Loki after Greek mythology.

#55 David Reynolds/Dean Canto
The Bottle-O Racing Team
Ford Falcon FG
FPR 1215
The first completed COTF Falcon by FPR in 2012 that was tested in EcoBoost livery. It was actually the third chassis that the team commenced the build of but the first car completed. It also was the car that ran demo laps at the Sydney 500 last year.

#80 Scott Pye/Paul Morris
eKol Racing
Holden Commodore VF
888A-035
Built by Triple Eight and perhaps best known for its large accident at Symmons Plains that made the headlines around the country. Car fixed on the jig at Nissan Motorsport.

#300 Michael Caruso/Daniel Gaunt
Norton Hornets
Nissan Altima
KR001
The first COTF chassis constructed by Nissan Motorsport/Kelly Racing, though not finished as a full race car until the start of 2013.

#888 Craig Lowndes/Warren Luff
Red Bull Racing Australia
Holden Commodore VF
888A-036
Lowndes’ car all season, which won the very first race of the Car of the Future era in Adelaide and then helped Lowndes take Mark Skaife’s most wins record at Barbagallo.