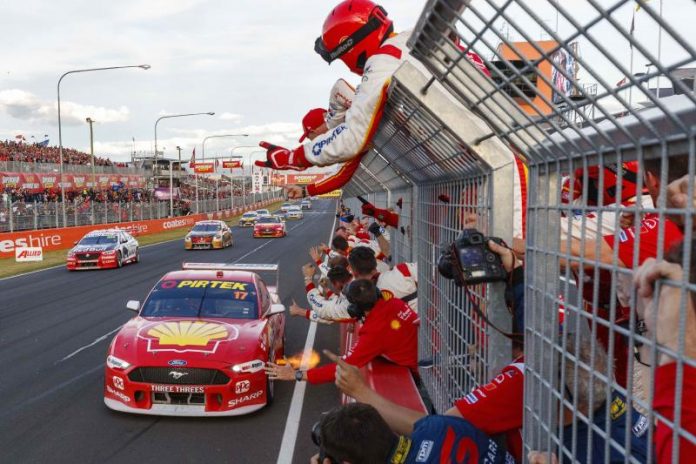 There’s always a pile of stats made on the Mountain …

THE 2019 Supercheap Auto Bathurst 1000 sure has got race fans up and about in terms of the controversial ‘Fabian Coulthard go slow’ situation late in the race that left the majority of the field bottled up behind the slow Shell V-Power Mustang.

We leave that stuff for everyone else to report and instead focus our energies on taking a look at the stats that were generated from the big race on Sunday.

Prior to the race on Network 10 I reminded Scott McLaughlin that his record-breaking 2017 pole lap had broken a 25 year pole position drought for DJR/DJR Team Penske at the Bathurst 1000 and that, this year, was 25 years since the team had last won The Great Race.

The rapid Kiwi certainly didn’t fail to deliver and he and Frenchman Alex Premat (or ‘Frenchy’ as the podium crowd started to chant!) swept home to victory, one that does officially remain provisional at the moment.

Victory in the race made the duo the 60th and 61st drivers to win the Bathurst endurance classic and the second combination in three years to win the race for the first time (Reynolds and Youlden in 2017 the other).

Apart from that there were a whole pile of other telling statistics and items of interest.

– They scored victory from pole position, the first car to do so since Garth Tander and Will Davison for the Holden Racing Team a decade earlier in 2009.

– Alex Premat isn’t the first ‘French’ winner for DJR or DJR Team Penske at Bathurst. After all, that was John French alongside Dick in 1981 – ha!

– It’s the seventh time since 1980 that the pole-sitting car has won the race.

– Premat has been on the podium in three of the last four Bathurst 1000s – 2nd in 2016 with van Gisbergen, 3rd in 2018 with McLaughlin and winner this year with McLaughlin.

– The runner-up result for van Gisbergen was his second at Bathurst, he was also runner-up in 2016 with Premat. For co-driver Garth Tander it was his sixth Bathurst 1000 podium finish and the 15th for Triple Eight.