Home News THE BEST CAR I EVER DROVE-CAM McCONVILLE 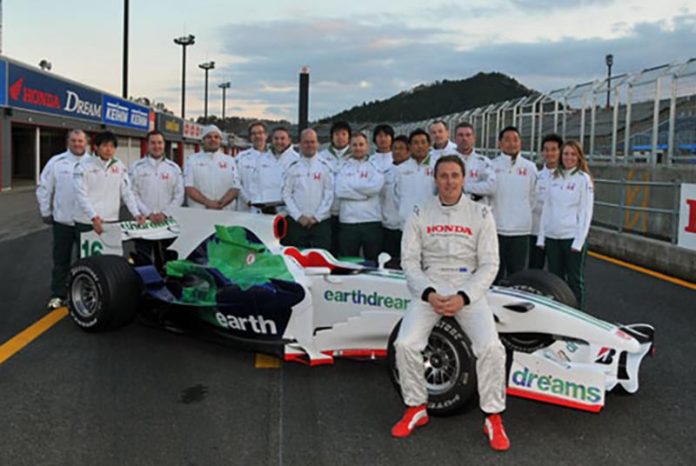 WE all find ourselves behind the wheel of something that leaves us with an experience we will never forget, a car that left a lasting impression or a ride that was too good to be true.

Earlier this year Cameron McConville dropped by the V8 Sleuth office and recounted his less-than-stellar time behind the wheel of a Ford Sierra at Bathurst in 1992.

But we also couldn’t help but ask the question, what’s the best race car he’d ever driven?

“Without doubt the Honda Formula 1 car,” McConville told us – without much thought!

McConville was lucky enough to be invited to ‘Honda Racing Thanks Day’ at the Twin-Ring Motegi circuit in Japan in 2008, an event that celebrates the Japanese manufacturer’s involvement in all forms of motorsport.

Soon after Honda announced its pull-out of Formula 1, leaving the Aussie as the last person in the world to drive a current Honda F1 car!

The 2002 Bathurst 24 Hour winner was working for Network 10 at the time, who helped facilitate the guest drive as part of a filming expedition for the network’s motorsport program ‘RPM’.

“I was fortunate enough to spend a day in the Honda through Channel 10 and got 30 laps at Motegi,” recalls McConville.

Despite driving a car that most could only ever dream of, McConville says the 2008 ‘Earth Dreams’ Honda didn’t receive much love in the F1 world.

“I remember Jenson Button saying the car was terrible at the time and the engineers said the drivers hated it. By F1 standards it was a bit of a lemon and the team had a pretty lean year in 2008.”

“The chassis I drove was the one Rubens (Barrichello) scored their one and only podium in that year at the British Grand Prix.”

McConville put in an impressive performance during the day with the Honda team giving him the go-ahead to have a run on new tyres and a low fuel load for the final laps of the event.

“They realised because I was racing professionally (V8 Supercars) that I wasn’t completely inept, so they gave me a go with it in qualifying trim,” he laughs.

“Although it was mind-boggling how quick it was, it was another race car that had a grip limit and braking limit, but I remember calling my wife that night and saying that I wished I had stayed in Europe and tried to do it.”

McConville, who retired from full-time V8 Supercars racing at the end of 2009, has since been enlisted to steer a very different breed of F1 machinery in the form of Minardi’s two-seater ride car.

The 44-year-old has regularly driven the unique beast since its debut at the Australian Grand Prix in 2009, taking a variety of guests for a unique thrill-of-a-lifetime around Albert Park.

However, despite his vast experience in a range of cars throughout his career, nothing will ever come close to his experience in the Honda and it’s a moment that McConville cherishes forever.

“I’ve still got the vision and data and all the technical analysis of the runs,” he says.

“Channel 10 also put together a nice booklet for me after it all which is nice to keep.”

We’ll be catching up with plenty more Australian motorsport identities over the course of the year on V8 Sleuth as they recount their best and worse race cars.