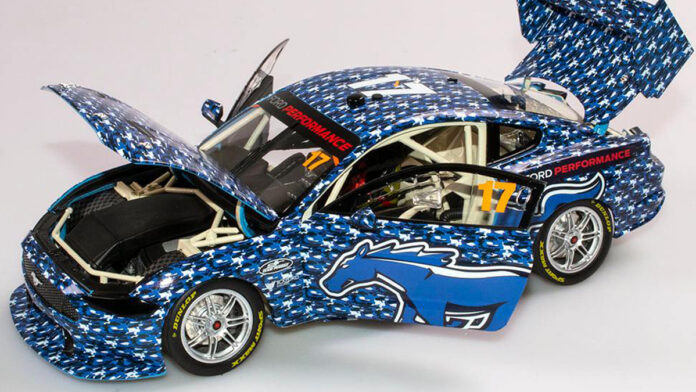 FORD’S Mustang became its Supercars challenger in 2019 and is in its fourth season of competition on this year’s Repco Supercars Championship.

But the car that started it all was the 2018 ‘Camostang’ test car driven by Scott McLaughlin and Fabian Coulthard – and it’s now been released as a 1:18 model and is available here to buy from the V8 Sleuth Online Store.

Unveiled in 2018, the livery was distinctive and somewhat controversial given it was the first chance that fans had seen the new Mustang with its unique shape given the need to clear the roll hoop of the category-specific chassis design.

The livery was specifically designed to confuse prying eyes and hide some of the new car’s distinct aero advantages.

Featuring the iconic #17 along with a stylised Mustang pony, DJR Team Penske, Tickford Racing and Ford Performance logos on top of the camo pattern, the car was given its first shakedown at Queensland Raceway in November 2018.

Produced in high detail die-cast featuring opening parts by Authentic Collectables, the 1:18 scale model is available in a limited run of 1002 with individually numbered Certificate of Authenticity included.