Home News THE CAR THAT MADE CRAIG 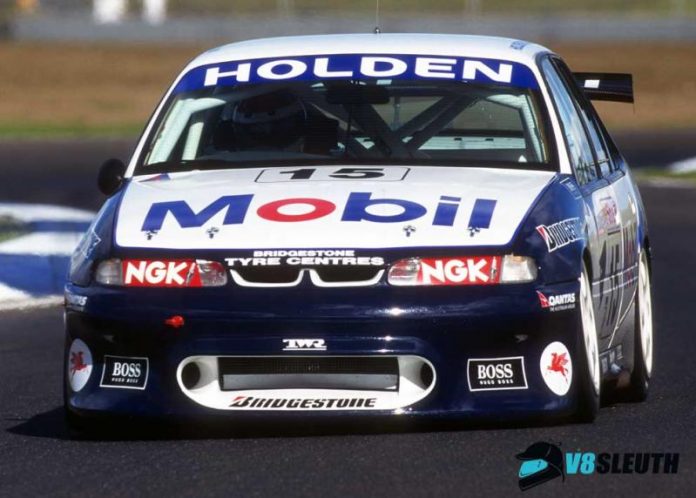 As Craig Lowndes prepares for his final full-time Supercars start, he takes us back to the impact that a certain Holden Racing Team Commodore had on his career …

IF there’s a car that made the motor racing career of Craig Lowndes, it’s the 1996 Holden Racing Team Commodore VR dubbed the ‘Supercar’ by the specialist press of the time.

Lowndes, who retires from full-time Supercars racing at the competition of this weekend’s season finale in Newcastle, has labeled the car he used to claim the Australian Touring Car Championship, Sandown 500 and Bathurst 1000 as the car that was the making of his career.

“I’m really blessed to have been a part of that era. It carved a path for the team and me. If I could have any of my old cars in my garage, that car is definitely one of them.”

The term ‘V8 Supercar’ or ‘Supercar’ hadn’t yet been floating as a new category name for V8 touring car racing when this car first appeared in early 1996. But the specialist press soon dubbed it as such.

“At the time I believed the way the car was presented and delivered to me was that it was superior,” said Lowndes of ‘Gabrielle’, HRT chassis 033.

“Dencar had done a lot of research and work on strengthening the chassis and improved its rigidity and it was going to be far better than any other car out there. I was led to believe I was sitting in a car far superior to anything else but now, as history will show too, that bar didn’t make a damn difference.

“Anytime you get a new car you mentally think it’s better anyway but it didn’t feel much different to the car we’d run at Phillip Island before the crash.”

Lowndes gave ‘Gabrielle’ its racing debut at the Calder round of the Australian Touring Car Championship and continued on to win the Lakeside, Barbagallo and Mallala rounds of the title, clinching the crown at the latter.

He and Greg Murphy then won the Sandown 500 and Bathurst 1000 in the celebrated chassis, which has been the inspiration behind a new limited edition TW Steel-produced timepiece – click here for further details.

The ’96 Bathurst-winning car was converted to VS specification for 1997 and crashed with Murphy at the wheel at Phillip Island after a front tyre failed and sent him smashing into an earth bank.

Eventually repaired, the car returned to the track in 1999 as a Young Lions Commodore with Todd Kelly at the wheel at Sandown before it was again painted in HRT colours for Cameron McConville to drive at Symmons Plains (filling in for Lowndes, who had knee surgery after a huge roll-over at Calder).

Lowndes drove the car in a reverse livery for his comeback round in ’99 at Winton before Kelly and Mark Noske ran it in Young Lions colours at the Queensland 500.

Lowndes again raced it at the non-championship Gold Coast Indy event, though a crash involving Steve Ellery and Garth Tander finished off the car’s racing career.

After spending time languishing in the HRT’s Clayton (Melbourne) business park, the chassis was sold to expat Kiwi Steve Andrew in Queensland and acquired by Eggleston Motorsport in mid-2016.

The Melbourne-based Super2 Series team has continued the restoration job of returning this very car to its 1996 HRT glory days, though there’s no specific timeframe upon its completion.