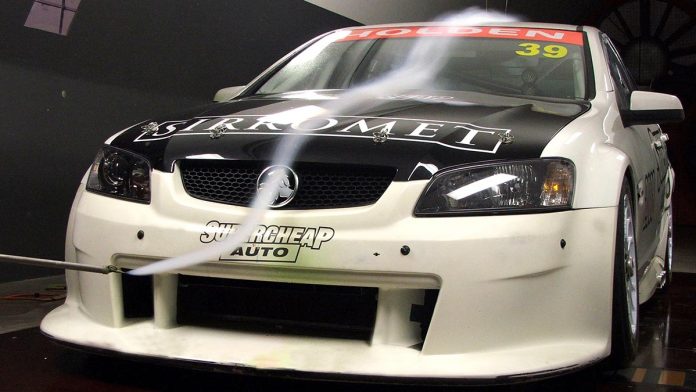 TAKING a Supercar off-shore for testing, whether it be on a race track, in a wind tunnel or on a shaker rig is absolutely banned under the current rules of the Virgin Australia Supercars Championship.

But once upon a time it wasn’t, which is how a Paul Morris Motorsport VE Commodore made its way to the United States in the lead-up to the 2008 V8 Supercar Championship.

The test came up during a recent episode of The Dale Jr. Download podcast with Morris as a guest, which prompted a question for our latest Q&A episode of the V8 Sleuth Podcast powered by Timken.

Listen to the episode in the player below!

“Was this known back then, was it common then for teams to do that, and which other teams have sent a car o/s for wind tunnel testing?” Matt Bottrill asked.

It was definitely known at the time – the images in this story were from a press release that had been sent out!

PMM wasn’t the only team to do so; Triple Eight Race Engineering, the Holden Racing Team, Perkins Engineering and Dick Johnson Racing all flew cars off-shore in order to test them in wind tunnels and on seven-post shaker rigs in a bid to find more performance in comparison to their rivals.

In Morris’ case, their brand-new VE Commodore chassis – named INDIAN by the team – spent time in the wind tunnel at Ayrdyne as well as on the shaker rig at Ohlins across the course of five days.

Morris was quoted at the time as saying the exercise over a full fortnight cost more than $200,000.

“It is just something we have to do to be as fast as we can,” Morris told the Herald Sun in late 2007.

“Just to find out more about what the car does and get more data about it. The more data you have the more educated changes you can make.

“You want to maximise what you have under the rules.”

Morris went on to race the INDIAN chassis in the 2008 championship, his last V8 Supercar season as a full-time driver in the ‘main game’.

It was also the first year of Supercheap Auto sponsoring PMM with Russell Ingall joining to drive in a two-car operation.

Photos of Ingall’s car, along with several other PMM-built Commodores, feature in our new book Racing the Lion: An Illustrated History of Holden in Australian Motorsport, a 400-page hardcover book paying tribute to the marque’s rich competition history spanning over seven decades.

Don’t miss out and pre-order it now here!

Morris and Ingall paired up for the Phillip Island and Bathurst endurance races, leaving INDIAN to be driven by Brit Matt Neal and American Boris Said.

The car became a PMM spare in 2009 though was wheeled back out for Tim Slade to drive at Winton after he’d damaged his regular chassis in the previous round in New Zealand.

The car was then sold on to Dean Fiore’s new Triple F Racing operation and driven by Fiore from Symmons Plains onwards in the championship that season with World Superbike star Troy Bayliss co-driving in the endurance races.

The Commodore spent some time in the then-Fujitsu Series in 2010 in the hands of Fiore’s brothers Todd and Paul before being on-sold to drift star Robbie Bolger.

Five years later the car was purchased by former Saloon Car and V8 Supercar driver Tim Sipp, his son Jack taking the wheel of it in the Kumho V8 Touring Car Series in 2016.

He last raced it at the Queensland Raceway round of the series last year and the car is for sale in the V8 Sleuth Online Showroom here.