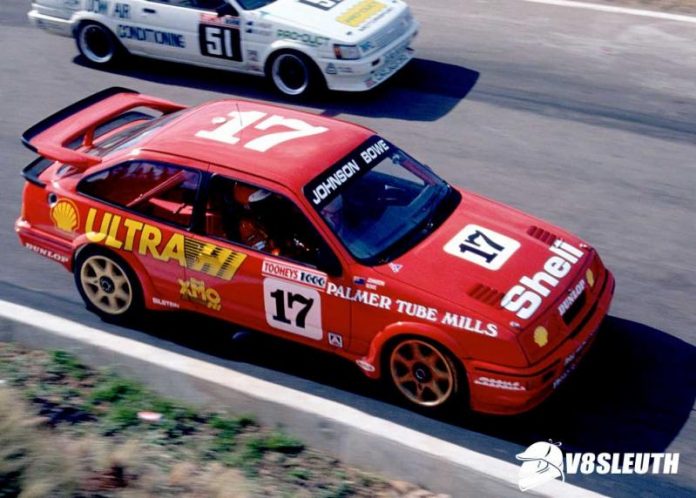 We recount the history of the 1989 Shell Mountain conqueror …

DICK Johnson and John Bowe’s victory in the 1989 Tooheys 1000 marked their first of two Bathurst victories as a duo on a day where they completely dominated the race.

The #17 Shell Ultra-Hi Sierra RS500 Cosworth led all 161 laps of the race at the line, only the pole-sitting Mobil car of Peter Brock getting in front all day, albeit only for the first half of the opening lap.

In fact, the 1989 Bathurst-winning car would have a very interesting life and go on to enjoy a long career at Mount Panorama and, indeed, in Australian touring car racing’s Group A era of the sport.

The fifth of six Sierras built by Dick Johnson Racing, the ’89 Bathurst winner was a new car for that year’s endurance races and debuted at the .05 500 at Sandown in the hands of Johnson/Bowe, finishing a delayed fifth.

It was retained by Johnson for the 1990 Australian Touring Car Championship and won at Symmons Plains and Phillip Island before becoming car #18 for Bathurst and finishing runner-up with Jeff Allam and Paul Radisich.

The chassis was again raced by Johnson in the 1991 ATCC and again became #18 again at Bathurst with Bowe, Radisich and Terry Shiel driving.

Bowe took the chassis over for the 1992 ATCC as #18 and won three rounds before it returned to carrying #17 for the Sandown and Bathurst enduros.

It claimed pole at Sandown and a controversial second at the Mountain in the horrible wet conditions, meaning it made four Bathurst 1000 starts and scored a win, a pole and a runner-up result during its lifetime.

was retired to become part of DJR’s car collection, which was eventually purchased by the Bowden family, who retain this car in Queensland as part of its impressive collection.

Speaking of the 1989 Bathurst-winning Sierra, the APEX Replicas team has just announced a new model of this car in 1:18 scale on the back of its release in 1:43.

Pre-order it here now to added to your collection and ensure you don’t miss out.

And if you’d like something special to hang on the wall and remind you of the 1989 Johnson/Bowe Bathurst-winning Sierra, don’t forget you can order our special winners poster celebrating this victory via the V8 Sleuth Online Store here.