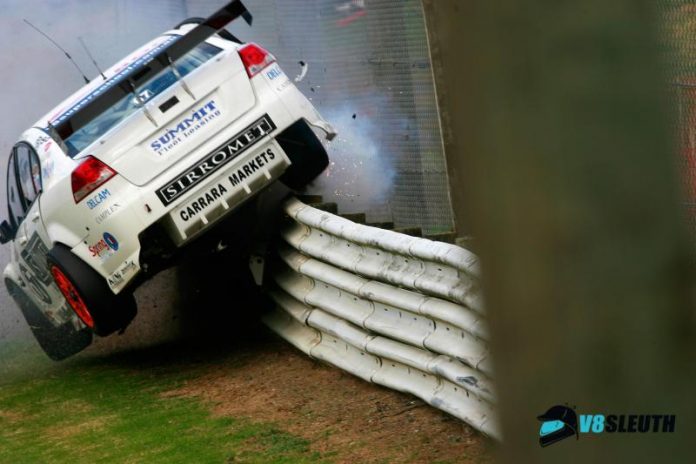 Our new distraction is the addition of race photographer Dirk Klynsmith’s amazing archive of Australian motor racing photos to the already burgeoning AN1 Images and V8 Sleuth archive.

Instead of diligently filing away almost 30 years of racing photos, we’ve been tripping down memory lane discovering new and exciting images of track action we’ve not thought about or seen for a while.

To view and order from a selection of photos from the AN1 Images archive head here.

As the Virgin Australia Supercars Championship heads to Pukekohe in New Zealand this weekend we thought we’d revisit Paul Morris’ big rollover at Pukekohe back in 2007.

Our man Dirk Klynsmith was on the scene of the accident at the high-speed corner running onto Pukekohe’s front straight as Morris and Brad Jones came together.

The result was this amazing sequence of images – and one very bent Commodore!

Says Klynsmith: “I was shooting with a long lens as they were coming around the corner. At the back of the frame I noticed something was going on and I was able to re-adjust just in time to get Paul hitting the wall.

“It’s a very fast part of the race track, so to get unloaded there is never a good thing.

“He ended up only 20 metres from me, but I wasn’t concerned. I was more interested in getting the shot.

“I’m famously known for crashes not happening anywhere near me. Other photographers hate it when I turn up where they are because it invariably means nothing’s going to happen!”

Morris told Auto Action at the time: “I gave him (Jones) heaps of room. Then I was hit in the rear and flipped upside down. It wasn’t real flash hanging upside down with the car running along on its roof.

“The impact with the wall didn’t seem that big. I was waiting for a big crunch, but it never came. Once everything stopped I knew I was okay.”

Klynsmith continues: “One of my favourite frames out of that sequence is Brad Jones carefully walking up to Paul’s car and looking in the window to see if he was alright – but he was keeping his distance in case Paul threw a helmet at him!”

Do you have memories of Pukekohe race action you want to share?