Home News THE ERAS: 50 YEARS OF FACTORY HOLDENS AT BATHURST 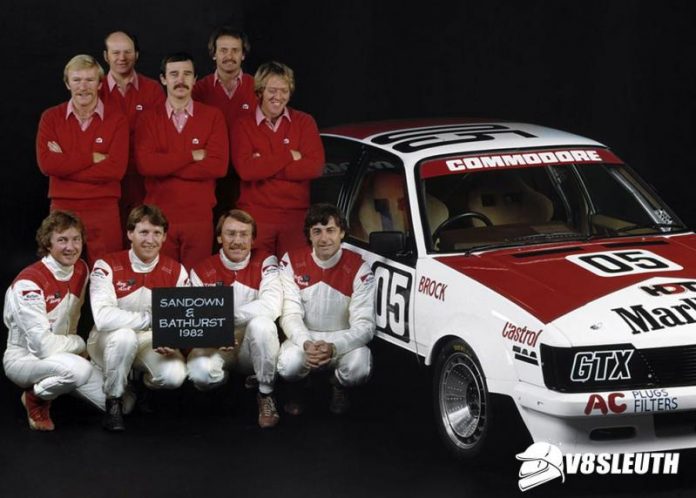 THE Bathurst 1000 has changed markedly across the past 50 years, and Holden’s factory involvement in the event has evolved along with it.

From its production car roots through to today’s purpose-built Supercars, Holden maintained an unbroken 52-year run of factory-backed entries in the iconic Mount Panorama endurance race between 1969 and 2020, the year when General Motors announced it was retiring the brand.

All iterations of Holden’s factory racing efforts in the ‘Great Race’ are depicted in the book Racing the Lion: An Illustrated History of Holden in Australian Motorsport, a 400-page hardcover book paying tribute to the marque’s rich competition history spanning over seven decades.

It’s in stock in the V8 Sleuth Bookshop – order it now HERE!

These are the nine different eras that span Holden’s five decades of factory racing at Bathurst.

THE FIRTH ERA – 1969-1977
Upon deciding to attack what was then known as the Bathurst 500 with a proper, (albeit clandestine!) factory-backed team in 1969, Holden wanted the best possible person to run it.

Harry Firth carried the nickname ‘The Silver Fox’ for his reputation as an expert preparer of cars for both circuit racing and rallying, and was an excellent driver in his own right with multiple Bathurst 500 victories to his name.

Firth headed the Holden Dealer Team from 1969 to 1977 and many of Holden’s most iconic factory race cars were born under his reign.

Along with running the HDT’s entries at the track, Firth was also responsible for the development and homologation of Holden’s cars for racing, determining the specifications of the XU-1, L34 and A9X Toranas before his retirement from the team at the end of the 1977 season.

Firth also had a keen eye for talent, with future legends Peter Brock and Colin Bond among his first recruits for the HDT.

THE SHEPPARD ERA – 1978-79
John Sheppard was renowned as one of the best in the business of building touring cars, having been responsible for the winning machines of Ian Geoghegan and Bob Jane in the past.

With Firth’s retirement, ‘Sheppo’ was recruited to run the Holden Dealer Team from the start of 1978, beginning one of the team’s most successful periods.

His meticulous approach to preparation resulted in a perfect record for the HDT at the Bathurst 1000 under his watch, while Sheppard’s exacting approach to presentation set a standard of excellence that Holden’s factory squads maintain to this day.

THE BROCK ERA – 1980-86
After racing and winning with the team under both Firth and Sheppard, Peter Brock took over the Holden Dealer Team for the 1980 season.

The team continued its winning form with the introduction of the Commodore model, developing it into a championship and Bathurst 1000-winner with Holden’s support across the latter days of Group C touring car rules and into the international Group A period.

The race team was run by figures including Bruce Nowacki, Larry Perkins and Neal Lowe across this era while Brock remained the owner, figurehead and lead driver, his on track success directly translating to road car sales through the HDT Special Vehicles business.

THE HOLDEN MOTOR SPORT ERA – 1987
Although its relationship with Peter Brock and the HDT ended early in 1987, Holden was still present at that year’s Bathurst 1000 in a factory capacity.

Under the branding of ‘Holden Motor Sport’, the factory backed the entries of Larry Perkins and Allan Grice, the former running his own Perkins Engineering operation, the latter driving for Les Small’s Roadways Racing Services.

THE PERKINS ERA – 1988-89
Holden’s new relationship with Tom Walkinshaw Racing and the establishment of Holden Special Vehicles extended to the race track, with Larry Perkins and Perkins Engineering becoming the factory squad for the 1988 season under the HSV banner.

After an initial plan for TWR to run its own factory-backed team in 1989, Perkins was contracted to field cars at the Sandown 500, Bathurst 1000 and Australian Grand Prix support races under the Holden Racing Team banner.

THE TWR HRT ERA – 1990-2002
Walkinshaw established his own squad in Australia for the 1990 season, with trusted lieutenant Win Percy entrusted with both managing and driving for the Holden Racing Team in its first two seasons.

The next few years saw the team build itself, piece by piece, into a dominant race-winning and championship-winning operation.

The recruitment of Jeff Grech as team manager, Brock as a driver, and a host of young engineering talent was crystallised by the addition of Craig Lowndes to its driving roster, who claimed HRT’s first championship win in his rookie season in 1996.

The friendly internal rivalry between Lowndes and Mark Skaife, its lead drivers from 1998 to 2000, pushed the team to the top of the sport, the pair securing every Supercars championship title from 1998 through to 2002.

THE SKAIFE HRT ERA – 2003-08
The collapse of TWR in 2002 saw Holden save HRT from joining other elements of the company in heading into administration; briefly taking ownership of the team while it sought the right buyer.

Holden found that buyer in the team’s lead car.

Skaife had just led HRT to three straight championships and back-to-back Bathurst 1000 triumphs, and became owner of the team he drove for in mid-2003.

He joined Brock as the only people to simultaneously own and drive for the factory Holden race team, capped by a victory in the Bathurst 1000 in 2005.

Skaife retired from full-time racing at the end of 2008 and sold his majority stake in the team at the same time.

The team added two more Bathurst 1000 wins to Holden’s factory tally in 2009 and 2011, and remained a competitive force into the new Car of the Future era in 2013, where rules dictated that a common chassis underpin every car on the grid.

Through this period, HRT shared responsibility for car design and homologation with fellow Holden-supported team Triple Eight and Holden’s own engineering resources.

The collaboration produced the Supercars-specification VF Commodore, the most successful car in championship history with a total of 108 race wins.

THE TRIPLE EIGHT ERA – 2017-2020
The final custodian of Holden’s factory support is the team that has been the dominant force in the Supercars Championship for much of the past two decades.

Just as in previous eras, in its capacity as the factory team Triple Eight is responsible for the design and homologation of the Holden Commodore that races in the championship and Bathurst 1000, successfully launching the ZB Commodore onto the racetrack for 2018.