Home News THE FALCON THEY BANNED DICK JOHNSON FROM RACING 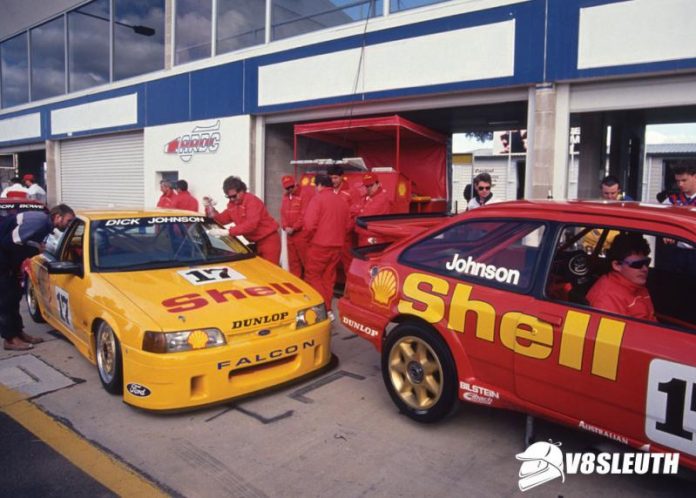 THE very first Dick Johnson Racing-built Ford Falcon EB touring car that was not permitted to race by CAMS has popped up on the market here on the V8 Sleuth’s Classified Page Powered By Tickford.

The first EB Falcon five-litre V8 racecar produced by the team was built under the direction of Neal Lowe in 1992 though was never actually raced by DJR after CAMS technical staff told the team the car was unacceptable and would need changes for it to be permitted to race.

The inner guards and engine mounting system were major bones of contention, especially the latter given the engine was mounted to the chassis via solid aluminium plates, thus making the engine a stressed, structural member of the car.

Later upgraded to EF and EL specifications by the team and used as a show car instead of ever forming part of the team’s race chassis line-up, the car has since found a racing life in Sports Sedan competition in Western Australia and has been placed up for sale by owner Rick Gill.

“It’s got an upgraded engine, clutch and gearbox in it and it has way too much horsepower for its mechanical ability but it’s a whole lot of fun,” Gill told us this year.

“I had a 5.8-litre motor in it, which then decided to drop a rod and break a crankshaft and put a hole in the block, so I bought a six-litre NASCAR engine from the United States and a sequential gearbox from FPR and it’s an absolute missile in a straight line, it’s a lot of fun!

“It’s still in the base Shell colours with the number 17 on it. It doesn’t have any of the Shell or Ford advertising on it like it originally had and it has a carbon fibre bonnet now, as it needs a hump in it because of the bigger engine. But other than the bonnet it looks like it was the day it was built.”

To read the fullinteresting story on this car’s life story, buy a copy of our acclaimed ‘The Falcon Files’ publication here in our online store now.