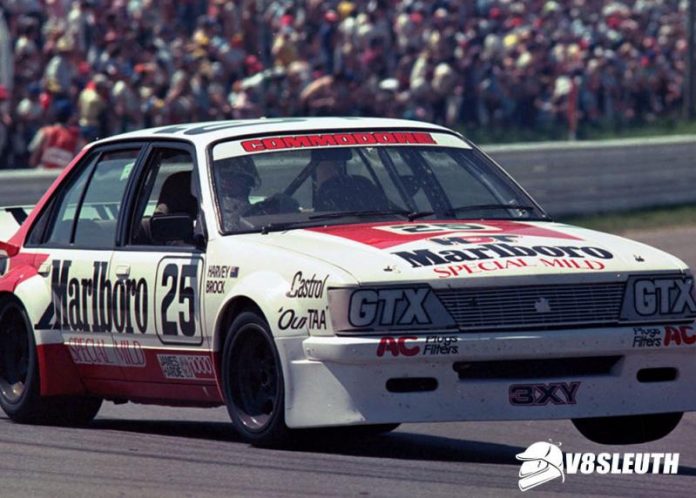 IT’S a rare feat for a driver to claim consecutive wins in the Bathurst 1000; it’s rarer still for an individual car to take back-to-back triumphs.

The first car to achieve the feat did so in the face of political turmoil, a controversial driver replacement – and a spot of incredibly good fortune.

The fourth Holden Commodore race car built by the Holden Dealer Team etched its place in history by winning the Bathurst 1000 in 1982 and 1983.

Its racing debut in 1982 came amid the homologation wars of the Group C era, and an on-going fight with CAMS (the Confederation of Australian Motor Sport) over car regulations and eligibility that ended with HDT chief Peter Brock taking the sport’s governing body to the Supreme Court.

A deal was eventually done for Brock to drop the action in return for a reduced three-month penalty, applied retrospectively to the bulk of that year’s Australian Touring Car Championship rounds.

Brock and the HDT wheeled out this car for the endurance races, a new SS special Commodore carrying a more powerful big-valve V8 Holden engine allied to the lighter weight of a basic Commodore shell.

Straight away it was fast as Brock took it to pole on debut at the Castrol 400 at Sandown. A full second under the existing lap record, the new car had a gearbox problem while leading.

Come Bathurst, the combination of Brock, his new co-driver Larry Perkins and his new Commodore were unbeatable.

While Allan Grice snatched pole position (as well as the first ‘official’ 100mph lap of Bathurst in a touring car), he was not a winning chance given co-driver – and car owner – Alan Browne – simply could not match the HDT driving line-up’s pace.

The opening laps between Brock and Grice were intense as they swapped the lead in a dice more akin to a five-lap screamer than a 163-lap marathon.

It came to an early end when Grice miscued and spun off at Murray’s Corner, letting Brock through to a lead he would not give up as he and Perkins marched onwards to victory.

The 1982 win also created another piece of history: the #05 car had one of Channel 7’s RaceCam units on-board and thus became the first car to carry one to victory in Great Race history.

The car continued as Brock’s mount for the 1983 ATCC, one in which he scored spectacular victories at Adelaide International (where he was awarded the victory in dead-heat with Allan Moffat) and at Lakeside (where he won by over a lap!).

More homologation upgrades were allowed by CAMS in mid-1983, with the Commodores benefitting from a chunkier front spoiler, a wider rear spoiler, and fatter Momo wheel rims.

While Brock once again moved into a new car for the big endurance races, the 1982 Bathurst-winning car becoming the HDT’s second entry for John Harvey and Peter’s brother Phil Brock for Sandown and Bathurst – although history shows that ‘Split-pin’ never got to drive the car in either event.

With the new #05 Commodore sidelined early at Sandown, Peter took over the #25 car from Harvey and went on to finish third on the road, though was excluded from the results for not being nominated as a driver of that car.

The same mistake wasn’t made at Bathurst. The paperwork was correctly filled out and, just as well too, as Brock’s race-leading #05 car bent an engine valve in the opening laps.

So, again, he took over his brother’s seat in the team’s second entry and Brock, the car’s regular pilot Harvey and Perkins went on to become the first three-man combination to win the Bathurst 1000.

This was the seventh Bathurst win for Brock (and second in a row for Perkins), the first for Harvey (on his 14th attempt) and the second straight win for this particular car in The Great Race.

However, the car was lucky to be fit to race at all. Harvey had narrowly escaped being involved in a massive crash in practice when a privateer Commodore driven by Jim Keogh spun approaching Murray’s Corner, then at the end of a Chase-less Conrod Straight.

The car slid at high speed across the infield and just missed collecting the #25 Commodore as it skated across the circuit.

The car’s second Mount Panorama triumph came in one of its last races with the HDT.

Perkins raced it in the touring car support race at Calder’s non-championship Australian Grand Prix before it was sold to privateer driver Andrew Harris, who campaigned it throughout the final season of Group C technical regulations in 1984.

The car survived its competition life intact and lives on today as one of just two cars to have claimed multiple Bathurst 1000 victories.