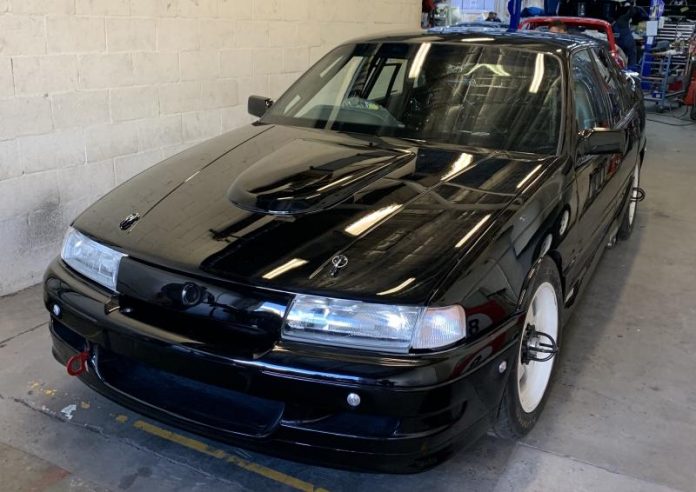 THE very first Group A VN Commodore built by Perkins Engineering in 1991 is undergoing a restoration that is on the home stretch with the car set to make a return at the track where it first made its racing debut nearly 30 years ago.

Built by Larry Perkins’ famous team, PE 011 is the first VN built by the organisation for Sydney privateer Bob Pearson.

In fact, it was constructed prior to the two Mobil 1 Racing VN that Perkins built for he and Peter Brock to drive in that ’91 season!

Later converted to VP specification and raced in the V8 Supercar era, the ex-Pro-Duct car been restored over the last decade by current owner Jamie McDonald back to its Group A VN specification.

Now it’s just a case of a few small elements before the car is ready to be returned to the track.

“We’re probably 95 percent of the way there now, the body work is complete and it’s now at the engine tuner to get the engine wiring installed and a tune put in the car,” McDonald told V8 Sleuth this week.

“Once that’s done it’s on to the dyno and the livery will be applied. Then the last piece of the puzzle is for Ron Missen to do the initial race setup for it. He’s done all of the engineering work on the car, he’s forgotten more than I will ever know – he’s phenomenal.”

McDonald has opted to present the car in its Pro-Duct 1992 ‘spiderman’ livery, below, with a return to racing for the car “highly probable” at the Sandown Historic event in late October.

It’s an appropriate place for the car’s first race in nearly two decades given the same venue was where it made its period racing debut with Pearson at the helm in the opening round of the 1991 Australian Touring Car Championship.

“It is the freshest Perkins engine that exists in the country,” says McDonald.

“LP made engines for a bloke over in Western Australia who stuck them into some BMWs he was doing SuperSprints with. Both engines had been crated up and had not been used for years and now I’ve got both of them.

“I had the engine for PE 010 (the Perkins ’92 Bathurst VL) in my Pro-Duct VP, so the car’s owner David Gardner approached me, so I did a deal with him and he got that engine and he supplied me one of the WA engines.

“A Melbourne-based collector had bought the motor I have in the VN now for his Walkinshaw VL Group A and he discovered he couldn’t use it as he had to have a twin throttle motor for that car. So I bought it from him, it was freshened up and the engine book courtesy of Jack Perkins shows it had less than 1000 race kilometres on it from new.

“It’s not a re-bodied engine or anything, it’s still as it was built. It wasn’t used by Larry or in any of his cars in period, but they’re the correct spec for the era.

“I originally had chased down and identified a Pro-Duct engine, but it wasn’t for sale.

“Everything in the car is 100 percent correct mechanical specification-wise. It’s got the five-speed Holinger gearbox – they only made something like 28 of them back in the day.

“I reckon this will be the best, latest spec Group A Commodore in the country when it’s finished.”

“I bought the chassis of PE 011 in 2009 and originally thought it would be a three-year project, it’s turned out to be a 10-year project!”

Later owned and raced by George Ayoub and Barry Morcom, its last race was in August 2000 in the hands of Tim Rowse in the final round of that year’s Konica V8 Lites Series at Mallala.