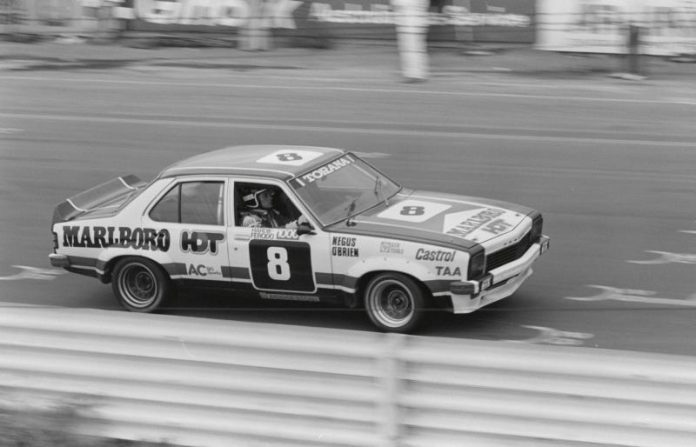 WHEN the Holden Dealer Team’s Bathurst assaults of the 1970s are talked about it’s very common for Peter Brock and Colin Bond to dominate the topics of conversation.

But then there were some other HDT entries that were perhaps overlooked in the past, including a car just announced for release by Biante Model Cars in 1:18 scale.

The 1976 fourth-placed L34 Torana from that year’s Hardie Ferodo 1000 driven by Charlie O’Brien and Wayne Negus has just been announced as a future release by the Perth-based model outfit.

While the crack Holden squad had tasted success in the 1974 ManChamp Series and 1975 Australian Touring Car Championship, the jewel in the Australian motorsport crown – the Bathurst 1000 – had at that stage eluded the Harry Firth-run HDT squad.

After failing on a grand scale in 1974 and being out-done by privateer Peter Brock in 1975, Firth was eager for a result and arrived at Mount Panorama with a two-car team; car #1 crewed by stars Colin Bond and John Harvey and car #8 crewed by Queenslander O’Brien and Western Australian Negus.

Gold Coaster O’Brien had made his Bathurst 1000 debut a year earlier in a privateer Torana L34 while Negus had finished runner-up two years earlier, also in a Torana, with Bob Forbes.

A total of 16 L34 Toranas started the Bathurst race in ’76 but the #8 Torana almost instantly found itself in troubles on race day.

Negus started the race and later in the day O’Brien found himself running in a solid third and looking good for a podium, though reportedly running on seven cylinders.

But Team Brock’s Peter Brock – delayed earlier in the day – was charging in the latter stages and got by O’Brien in the closing laps to grab third place and relegate the second HDT Torana to fourth place with both cars running around three laps behind the leaders.

That was the position both cars held to the line, crossing 3.1-seconds apart to give O’Brien what would remain his best Bathurst 1000 finish for 18 years until he ran home fourth alongside Tony Longhurst in 1994.

However, with the HDT car of Bond and Harvey finishing second and O’Brien/Negus fourth, it marked the third time that a pair of HDT cars had finished in the top four at Bathurst, a feat that wouldn’t happen again until 1982.