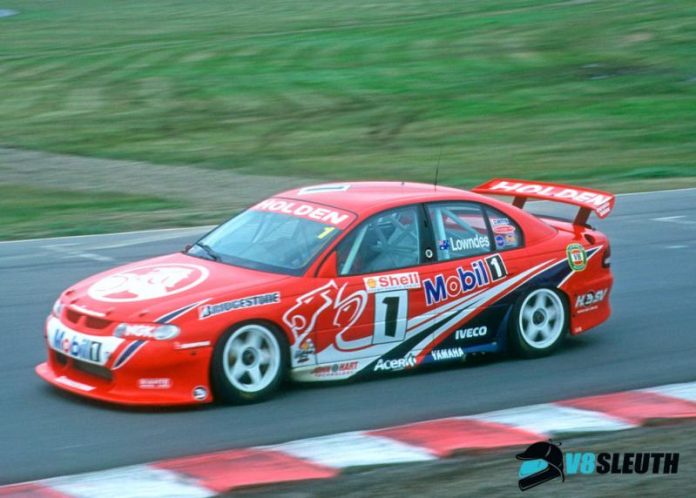 IT’S June 2000 and the Holden Racing Team needs drivers for its annual endurance campaign in what was then known as the Shell Championship Series.

It has two of the biggest names in the sport, Mark Skaife and Craig Lowndes, plus Young Lion Todd Kelly, and is working out who else is can slot into its seats for the Queensland and Bathurst endurance races.

AUSCAR star Nathan Pretty is one driver that gets a phone call and another is made toa guy that had raced hard against the likes of Lowndes and Steve Richards in Formula Ford but was no longer competing.

The story of how the-then 32-year-old came to get a surprise call up from HRT to step aboard the car Craig Lowndes had been racing in the first half of the 2000 championship (HRT 041) is one of many told in our 2017 release special collector’s edition book covering the full racing history of every Holden Racing Team race car.

To make sure you don’t miss out on your copy of the collector’s edition limited to just 1000 copies, pre-order here now.

Monaghan finished fifth in the 1993 Australian Formula Ford Championship (won by Lowndes) and was runner-up in 1994 to Steve Richards (pictured here in this season at Sandown in the #5 BP Visco Van Diemen) and again in 1995 to Jason Bright.

Even the most ardent of HRT fans may not even recognise Monaghan’s name, let alone know he drove one of the famous red cars – V8 Sleuth tracked him down to talk about it.

“It was all out of the blue, I had worked with Peter Verheyen in Formula Ford and once I stepped out I worked with him on some cars and that included Todd Kelly and later Rick,” Monaghan told V8 Sleuth this week.

“I was at the Grand Prix in 2000 helping Pete run someone else and Todd was by then a Young Lion. Jeff (Grech, HRT Team Manager) came over and we were talking and the subject of me driving ended up bounced around and he said he’s get back to me.

“So that led to heading to Winton for a test. I hadn’t driven anything in three years (since co-driving privateer Mike Conway’s ex-DJR Falcon EB at Bathurst in 1997) and had only done the odd lap in a Formula Ford in some customer cars to clarify setups but basically nothing.

“It wasn’t a bad day actually at Winton. I had two cracks in the car, about 30 laps,and I was pleasantly surprised with how I went having not driven for three years. Testing a HRT car was the knock on the door everyone wants to answer!

“I knew a few people in and around the team and I think at the end of it I left the day under the impression we’d have another crack at it. A week later Jeff called to let me know that unbeknown to him Walkinshaw had done a deal with (Jason) Plato and (Yvan) Muller to race (they drove at Bathurst in the #2 HRT entry).

“That pretty much sealed the deal for me with my time in motorsport. I had a job running tyre stores for Beaurepaires and my life was moving on and I was on the fringes of the sport whereas other guys were hanging in there and doing anything they could to stay in the game.

“There were plenty of drivers in my era that didn’t get the breaks but the guys in my era were the key ones that turned V8s on their head. Cam McConville dabbled and got the raw end of the stick (after his crash in a DJR Falcon at Bathurst in 1993) and then Lowndes turned the corner for everyone and opened flood gates for the new blood which was well needed at that point.

“Not too many people can say they’ve tested or raced a HRT car, it’s a good thing to look back on.”

Monaghan hasn’t raced since – though he did do some customer ride day driving a little while back in a Porsche at Queensland Raceway – and now works in Queensland running 7-Eleven’s operations department, his racing career seemingly a lifetime ago.

“I’ve been in Queensland for 13 and a half years and worked my way through the business at 7-Eleven. We’ve got 158 stores up here out of a 650 odd network across the country and I’ve looked after the ops team up here for the last seven years. My wife Sam and I have four kids now so that keeps us pretty busy!”

It’s not every day the factory Holden team calls and offers a test of their V8 Supercar race car. While he may never have got to don the famous red overalls in an actual race, Monaghan sure has a great story to keep telling his kids and grandkids for plenty of years to come …