Home News THE HRT RACE CAR THAT NEVER WAS! 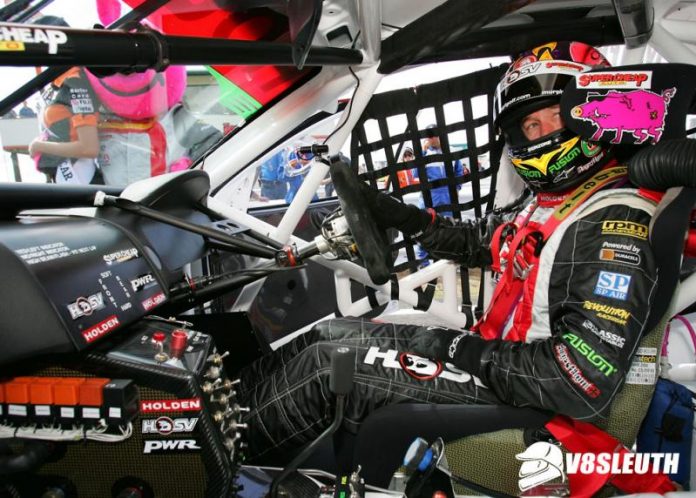 EVERY family has a member that is just a little bit different.

They don’t quite fit in or perhaps they just don’t walk, talk or act the same as the rest of their clan. But that doesn’t mean there’s anything wrong with them. In fact, it’s what makes them stand out from the rest of their family as a unique, special and important family member.

Chassis HRT 046 is exactly that family member in the context of documenting the histories of Holden Racing Team Commodores, which the V8 Sleuth team is doing at the moment as it works on content for our new release book covering the histories of every HRT race car from 1989 to 2016.

Make sure you don’t miss out on a copy by pre-ordering it here now!

HRT 046 was the third VX Commodore constructed by Dencar for TWR Australia in 2001 and was originally allocated for HRT itself (hence the chassis number!) but a last minute swap saw it head to its ‘little brother’ Kmart Racing squad.

The Kmart team had been created for the 2001 season in response to the retail giant departing its sponsorship at Gibson Motorsport. TWR Australia established the new entity in the Clayton business park that also housed the HRT; however in a separate building that had been occupied by the Holden Young Lions project the previous year. With staff carried over from that program and additional bodies employed, the team relied on ‘hand me down’ chassis from its ‘big brothers’ at the HRT.

Completed at the end of 2001, the new car had a shakedown four days before Christmas with Greg Murphy behind the wheel. Its maiden outing at Calder in a test ended within just 22 laps of running with a rear hub issue. Nobody knew it at the time but the volatile Kiwi and this very car would find themselves in some of the most controversial incidents in V8 Supercar racing history!

The first came in the second round of the 2002 season when the Kmart pilot collided with Jason Bargwanna shortly after the start of Race 1. The end result sent Bargwanna tumbling down the road (see video below) and his Valvoline/Garry Rogers Commodore ripped to shreds before some push and shove on the grid between the two prior to the restart.

Then later in the year a victory in the Queensland 500 went begging as Murphy ran dry of fuel with just laps to go while leading.

Even worse was to follow at Bathurst as a communication breakdown left Murphy being waved out of a fuel stop in the pits prior to the refueling hose being uncoupled. The end result was a decent-sized fuel spill and the biggest in-race penalty in V8 Supercar history – a five-minutehold in the pit bay!

There remains no doubt the #51 Kmart Commodore had been a genuine chance to win the race, but it only seemed to set up the further controversy that was to follow HRT 046 in the years that followed.

The introduction of the new VY model Commodore in 2003 didn’t affect Kmart Racing and they stuck with the proven VX model and existing 18-degree Chevrolet engine. Again Murphy was at the helm, racing this chassis through until Oran Park when he ‘debuted’ the rebuilt HRT 043 chassis in Kmart colours after repairs from Todd Kelly’s Darwin accident.

Rick Kelly took over Murphy’s 046 car for the Oran Park round and the remainder of the season, only giving it up for endurance pilots, British Touring Car ace Andy Priaulx and former Privateer’s Cup champion Cameron McLean, at the Sandown 500 and Bathurst 1000.

Upgraded in time for the 2004 season to VY specification (but retaining the 18-degree Chevrolet engine) it was reunited with Murphy for the first half of the season before he felt a change of chassis may bring improved results. As a result he stepped out of HRT 046 after Hidden Valley and it lay idle at Kmart Racing for the remainder of the season.

Murphy departed to Kees Weel’s Supercheap Auto-backed PWR Racing team in 2005 and HRT 046 went with him as well. Updated to VZ specification it took Murphy to his record fourth round win in five years on home soil at Pukekohe and later swapped to a Perkins Engineering-built motor when the PWR squad did a deal with Perkins for supply of the newer-generation ‘HMS’ engines after cutting its ties with Holden Motor Sports.

The engine change was made in time for the Hidden Valley round but the standout feature from the 2005 season for HRT 046 occurred at Bathurst. A late race fight for the final podium position between Murphy and bitter rival Marcos Ambrose ended with both men out of the race, their nose-to-nose confrontation in the aftermath the stuff of legends in the history books of Mount Panorama (see video below).

Murphy rounded out the season in his Bathurst chassis and retained it for the 2006 season, though it began the year with a big accident at Adelaide (which prompted a repair job that included two new front chassis rails and a range of other parts – the car and Murphy missed the Albert Park F1 event as a result) and then followed it up with another one at Pukekohe.

The #51 Commodore was repaired to at least get the hometown hero onto the track for the final two races on the Sunday but the team then replaced everything from the firewall forward in time for the next round in Perth.

The team didn’t use this car for the endurance races and Murphy then spent some time in it to finish off the ’06 season before he left the PWR team for Tasman Motorsport.

The car was retained by PWR Racing and sat idle for the next few years before being sold to South Australian Adam Wallis in 2010. He used it in the Adelaide and Bathurst rounds of the Fujitsu Series and then ran it again in Adelaide in 2011 before selling it mid-year to fellow South Aussie Ian Yeing.

New to motorsport, the transport company operator used it in some local Sports Sedan races at Mallala before joining the Kumho V8 Touring Car Series in 2012. He continued in the car in 2013, however the livery was returned to the Supercheap Auto base colours it had carried some years earlier in the hands of Murphy, making it instantly recognisable on the track to savvy, sharp-eyed V8 Supercar fans and since then has done some Kumho racing in the hands of Craig Dontas.

While it may not have carried the familiar factory red livery of the Holden Racing Team during its life or lived in the team’s workshop, HRT 046 has a special connection as part of the extended HRT family.

It shares the DNA of its cousins and stands out as a defining car in the career of one of New Zealand’s best racing stars, Greg Murphy – who was reunited by V8 Sleuth with the car at Queensland Raceway’s Kumho round in 2013.