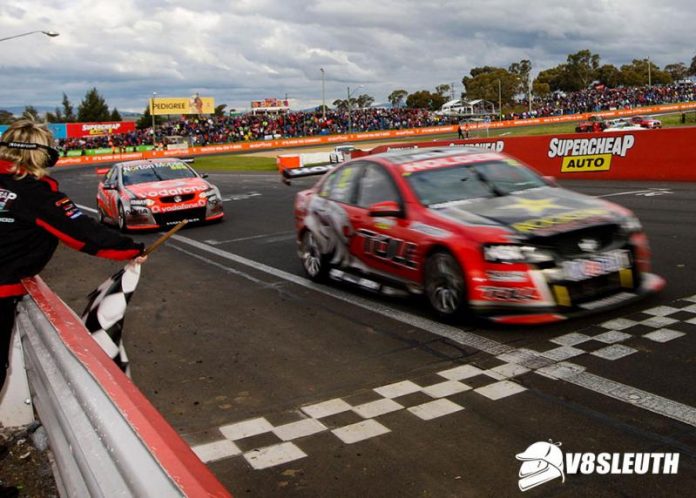 HOLDEN’S factory-backed racecars have claimed victory in The Great Race at Bathurst on 15 occasions, each of the individual machines to claim these victories holding a special place in Australian motorsport history.

The last Holden factory win came in a nail-biting finish in 2011, as Garth Tander held off Craig Lowndes to clinch victory by just 0.2917-seconds – at that stage it was the closest finish between competing cars in the race’s long and storied history.

It gave Tander his third Bathurst 1000 victory but took rookie co-driver Nick Percat to his first in his very first attempt at the Mountain’s 1000-kilometre classic.

Percat therefore became the first rookie since the great Belgian champion Jacky Ickx (who won in 1977 with Allan Moffat) to win Australia’s ‘Great Race’ at his first attempt.

“The car was very good for the majority of the day except in that last stint,” said Tander post-race.

“We made a change for the second last stint and managed to pull a gap on Jamie (Whincup). We made another change for the final stint with the cloud cover and the car wasn’t quite as nice. We got to the lead when it counted and we weren’t going to give it up.

“I had to make sure we were fast in the key areas of the track to make sure they couldn’t have a go at us. I felt their (TeamVodafone’s Lowndes/Mark Skaife) car was quite good on the straights, so I had to get a good run onto Mountain Straight and out of Turn 2 up to The Cutting.

“He had a sneaky look up at the tree (Reid Park) – I thought it was going to be fun if he tried to come through there… then it was just a matter of getting out of the Elbow as clean as possible, and then it was going to be a very wide car in the two key braking areas at the end of the lap. The rear tyres were well past their best.”

So what became of this factory Holden Commodore VE II – chassis WR 014 – that took the Holden Racing Team to its 200th all-time race win and gave the HRT its seventh Bathurst 1000 victory?

The car made its racing debut in the hands of Garth Tander at Symmons Plains in November 2010 (taking pole position for its very first race!) and was also Tander’s car throughout the 2011 and 2012 championships to the end of Project Blueprint regulations (New Generation cars were introduced to V8 Supercars for 2013).

Ironically, just as it had scored pole position on its V8 Supercar Championship debut at Symmons Plains in 2010, it also scored pole for its last ‘main game’ race, also with Tander driving, on the Sunday at the 2012 Sydney Telstra 500 on the Sydney Olympic Park street circuit.

It scored victory on the Saturday in the 2011 Clipsal 500 in Adelaide and also the Saturday race in Townsville that year prior to its success at Mount Panorama.

Returned to its 2011 #2 Bathurst-winning livery, the car was placed on display at Holden Special Vehicles in Melbourne when its racing career was over before appearing for sale in mid 2016.

A deal was done in 2017 for Zak Brown – head of the McLaren F1 team and partner in United Autosports, who soon after acquired a stake in what became Walkinshaw Andretti United – to purchase the car and take it overseas.

In fact he slipped behind the wheel late that year, giving the ex-HRT racer a blast at Donington in England and Aragon in Spain, the latter being an opportunity that could have seen Fernando Alonso jump behind the wheel to turn some laps.

However the car ran out of fuel with another driver at the wheel and the test day – where Alonso was busy driving an LMP2 Sportscar – came to an end, leaving the multiple F1 World Champion unable to add his name to the list of pilots of WR 014.

The 2011 HRT Bathurst-winning Commodore remains in Brown’s collection, proof that cars that have conquered the Mountain for Holden remain special not only in Australia, but all over the world.