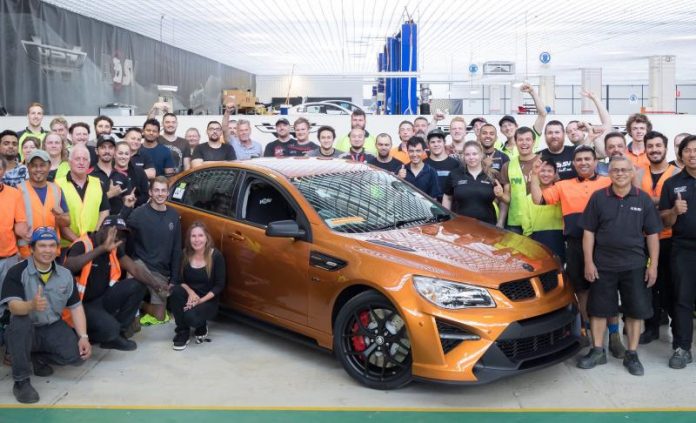 End of an era for Holden Special Vehicles …

A CURTAIN has come down on a chapter at HSV with the final Commodore-based model rolling out of the company’s assembly facility in Clayton, Melbourne, drawing to an end a total of three decades of the company modifying locally-built Commodores.

A ‘Light My Fire’ GTSR W1, build number 275 of 275, was officially acknowledged as the last vehicle to be built and will be retained by HSV.

Official company records note that HSV has built 90,114 vehicles to the end of 2017, the vast majority of which are made up of Commodore-based variants.

HSV has recently moved into a new, more modern facility in Clayton South, where production of the Colorado SportsCat, and conversion of both the Chevrolet Silverado and Camaro, will take place into the future.

“For all at HSV, this is a time for great reflection on what the company has been able to achieve to date,” said HSV Managing Director, Tim Jackson.

“Any success we’ve enjoyed has been directly attributable to our passionate staff, our dedicated dealer-body and of course our loyal fans who have helped build this brand through its 30-year journey.”

HSV has also provided a list below of some of the production volumes of its key models and we have included it below.