Home News THE LAST OF THE GIBSON ERA FOR SALE 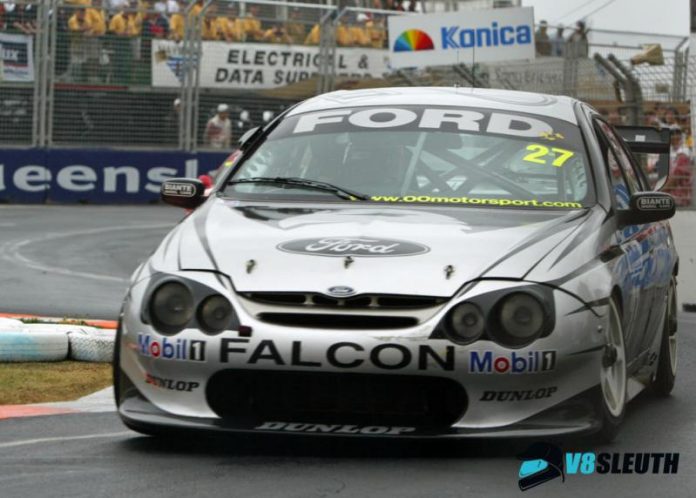 The last Gibson Motorsport-builtV8 Supercar is on the market …

It ran the factory Nissan team from 1985 to 1992 and then swapped to Holden Commodores from 1993 onwards.

Team boss Fred Gibson sold GMS to Melbourne businessman Garry Dumbrell for 2000 before it was bought back via Bob Forbes and became a Ford team in 2001 with Gibson returning as frontman.

History shows that Gibson and Forbes fell out and the team was renamed 00 Motorsport for 2002 after the former departed, however the last car to be produced under the GMS name is now on the market, advertised here on the V8 Sleuth website.

GMS 015 – actually the 14th V8 Supercar to come from the team given it skipped 013 for reasons of superstition – is a Ford Falcon AU debuted in 2002 and driven by Neil Crompton.

While it ran under 00 Motorsport’s banner in ’02, its build was commenced when the team was still known as GMS and, thus, is the last-ever GMS race car in a long line of Nissan Skylines, GT-Rs, Commodores and Falcons.

Driven by Crompton all season (bar the non-championship Albert Park event – it was still being completed – and the Queensland and Bathurst endurance races), it then was sold to Tony Noske for his son Mark to drive in the 2003 championship.

WPS Racing’s Craig Gore acquired it when he bought the 00 Motorsport hardware and it was later re-skinned into BA model body panels and used as a ride car.

It was later sold and eventually made its way into the hands of Western Australia Richard Bloomfield.

It was returned to AU panels and had a 00 Motorsport-like livery returned to its flanks, paying tribute to the sister ‘Green Eyed Monster’ car that had previously been driven by Craig Lowndes.

Now this car is up for sale and is being offered to parties via the V8 Sleuth website.

Being a pre-Project Blueprint car, it’s eligible to join the growing Australian 5 Litre Touring Car Association ranks and can even still compete in the Kumho V8 Touring Car Series or Sports Sedans.

It comes with a range of spares and has just had its price dropped, check it out here on the V8 Sleuth website.