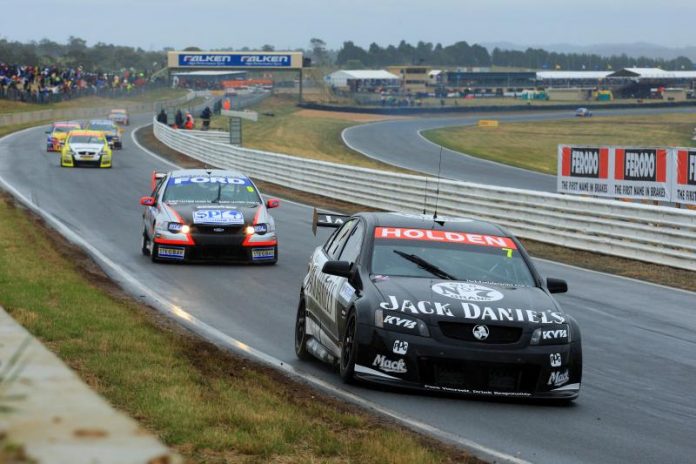 THE car that gave Larry Perkins’ team its very last V8 Supercars race win is making its first appearance in the Kumho V8 Touring Car Series at Winton next weekend.

The car was built by Perkins Engineering for Todd Kelly to drive in 2008 and made its debut at Barbagallo in Perth that season. He won a race and finished second overall in the penultimate round at Symmons Plains later that year; the win was the last for Perkins Engineering in the V8 Supercars Championship.

The chassis moved across to the Kelly’s own team the following year when Perkins’ team wound up its operations.

The car was raced by Jack Perkins in Dodo colours and then by former Top Gear ‘Stig’ Ben Collins and Nathan Pretty in the 2009 endurance races. Tony Ricciardello ran the car in 2010 before it became a spare and ride car for the team. It won the team’s first race with Rick Kelly behind the wheel at Hamilton, New Zealand, in 2011.

Collins purchased the car in 2012, when it was returned to a 2011 Jack Daniel’s livery in which it remains to this day. He’s regularly raced it in Sports Sedans and has also run with the Australian 5-Litre Touring Car Association in the years since acquiring the car.

Collins and the rest of the Kumho Series field will be in action at Winton next weekend on May 19-21 at the Winton SuperSprint.

V8 Sleuth is once again an official series partner of the Kumho Tyre Australian V8 Touring Car Series this year.