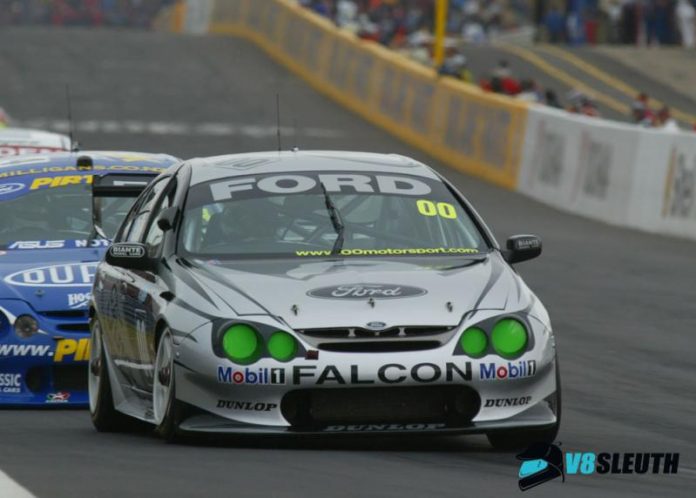 Craig Lowndes’ Gibson/00 Motorsport ‘green-eyed monster’ Falcon from 2001 and 2002 is one of our-most requested cars!

THERE’S no doubt in the V8 Sleuth office as to the cars that are the most-requested cars by V8 Supercars fans in terms of specific chassis histories.

Craig Lowndes’ ‘green eyed monster’ 00 Motorsport Falcon AU from 2001 and 2002 is most definitely one of the most-requested cars from our followers and, while it was a car that didn’t deliver a championship or Bathurst win, it definitely made its mark.

Featuring a striking silver livery designed by Ford designer Nick Hogios, Gibson Motorsport chassis number 014 debuted at Bathurst in 2001 in the hands of Lowndes and Neil Crompton and was quickly dubbed ‘The Green Eyed Monster’ because of its striking fluro green headlight covers and livery.

The first Falcon built by Gibson Motorsport when it switched to Ford for 2001 (the team’s first two cars were ex-Stone Brothers and ex-Colourscan), the car also featured the first in-house Gibson Ford engine and debuted amid much hype late in ’01.

One of its distinguishing features was an open-top steering wheel, something very Formula 1-like for a V8 Supercar of the period.

It was driven again by Lowndes in 2002 – thought this time under the 00 Motorsport banner after Fred Gibson parted ways with the team that had carried his name.

Lowndes crashed into a stationary Max Wilson at Phillip Island (after the Brazilian had laid a smoke screen which meant no other drivers could see), which prompted some repairs but it wasn’t too long before the Ford signing had his ‘monster’ back and he drove it for the balance of ’02.

Again, Crompton joined Lowndes for Bathurst, however a plastic bag blocked the car’s radiator and it was forced to retire when it cooked itself in the latter stages of the race.

Lowndes departed for Ford Performance Racing for 2003, so this car reverted to Rodney Forbes’s hands for the new season at Albert Park, Adelaide and Phillip Island before he debuted a new BA Falcon at Eastern Creek and this famous AU Falcon essentially moved into racing retirement.

While the rest of the 00 Motorsport hardware was sold to WPS Racing on the Gold Coast at the start of 2004, this car was not and was returned to Bob Forbes in Sydney along with the ex-SBR car that Lowndes drove when he first moved to Ford at the start of ’01.

The ‘Green Eyed Monster’ was displayed at the inaugural Sydney Telstra 500 in 2009 and has spent time since in the National Motor Racing Museum at Mount Panorama, Bathurst as well as appearing at the Muscle Car Masters at Sydney Motorsport Park.

“It is special to me,” owner Forbes told our V8 Sleuth a while back.

“It was a bit of a challenge for Gibson Motorsport to switch from Holden to Ford, after running Holdens for so long, including when Garry Dumbrell owned it.

“I thought that it was a good thing to get involved in. I think it’s turned out to be right that around that time a lot of fans starting to follow drivers, not just Ford or Holden. There are definitely ‘Ford or Holden’ people, they couldn’t care though who was driving, whereas others follow drivers.

“I think when Craig did the switch it was pretty emotional at the time for some Holden fans, but there were plenty of people on the other side who were happy to see him in there.

“The team did a good job of getting Craig on the pace. In those days, pre-Project Blueprint, there was quite a difference between the Falcon AU and the Commodore in terms of downforce.

“It was a great design too. Young Nick, who worked at Ford at the time, I actually spoke to him a while back to clarify exactly which paint was originally used and we faithfully followed the design.

“The other thing about that car, (the late) Trevor Young from Biante told me at the time it was the biggest selling model they had ever had. It had the biggest demand and they made more than what they normally would have.

“Both this car and the ex-Stones car were mechanically brought up to speed before the team was sold off.

“They were both mechanically rebuilt and resprayed and re-signwritten as they were.

“We left the inside of the car as it was, complete with scuff marks, so it’s all original on the inside. With the panels, naturally they get knocked around when they are racing, but it’s pristine now – a proper restoration.”

Here’s a YouTube clip of Lowndes doing a lap of Bathurst in the car in 2002 with Mark Skaife and Greg Murphy: