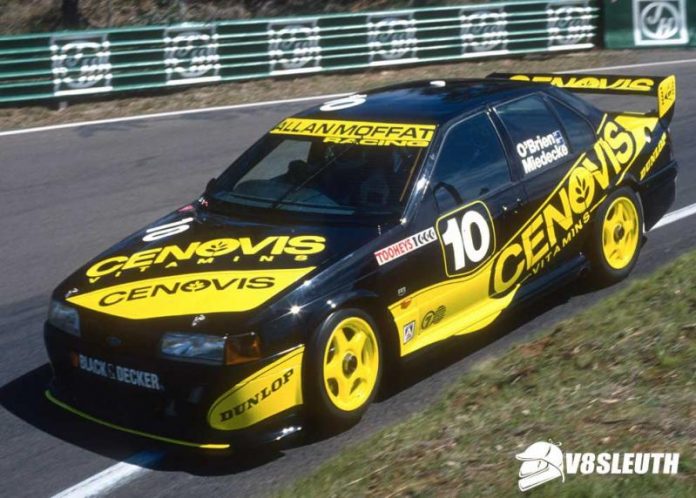 From his GT-HO factory Falcons of the early 1970s to the blue Brut 33 Hardtop and the XC 1-2 form-finish cars of later that decade, Moffat is instantly the Ford name that dominates Bathurst history books that cover the 1970s.

After becoming a Mazda man for the first half of the 1980s – and a season with Peter Brock’s Holden Dealer Team in 1986 – the four-time Bathurst winner ran Sierras for quite some years.

But the change from Group A rules to five-litre V8 racing in 1993 meant his Eggenberger-built turbo cars were instantly redundant and he needed a Falcon for his next trip to Mount Panorama.

The end result was a striking black and fluro yellow Falcon, which captured the eyes (and ears!)of race fans as it zipped by around the Mountain.

It was built new as an EB Falcon in 1993 by Russell Caddy and Ian Walburn for Moffat and debuted at Bathurst complete with carburetor V8 engine supplied by Holman and Moody in the US (rather than the fuel injection systems run by all other teams) in black and fluro yellow Cenovis colours by Andrew Miedecke and Charlie O’Brien.

It only made four appearances in the hands of Moffat’s team and each year that appearance came at Bathurst. The car retired early in ’93 and then finished eighth in 1994 with Miedecke and Brit Jeff Allam driving, by now fitted with a fuel injected engine.

It was an early retirement again in 1995 with Miedecke and Mark Noske, before having its last hurrah in Moffat’s hands in 1996 with German ace Klaus Niedzwiedz finally returning to the Mountain to team with Ken Douglas.

The duo finished 10th before the car then sat around without a racing budget.

It was bought in 1998 by South Australian privateer Alan Heath, who updated the car to EL specifications and ran at Bathurst that year with Douglas, however the car was involved in a massive multi-car accident when Heath was tagged into the wall approaching Forrest’s Elbow.

The damaged car was sent to MTA Group Training in South Australia and the students rebuilt the car for Ross Halliday to use in the inaugural 2000 Konica V8 Lites Series – now known as the Dunlop Series.

Halliday then put the car back to Cenovis livery and EB specification and it was sold to passionate Perth-based collector Andy Brown, who still owns the car and has put it back to its 1994 Bathurst livery, complete with small ‘winglets’ that typified the EB series II model.

While this chassis was not raced for some years, it remains a car the V8 Sleuth often gets plenty of email about – one day no doubt it will form the basis of an expanded feature in one of the many publications the ‘Sleuth contributes to.

Check out this link to 1994 Bathurst action – let it play and you’ll be able to see and hear the Cenovis Falcon in action!