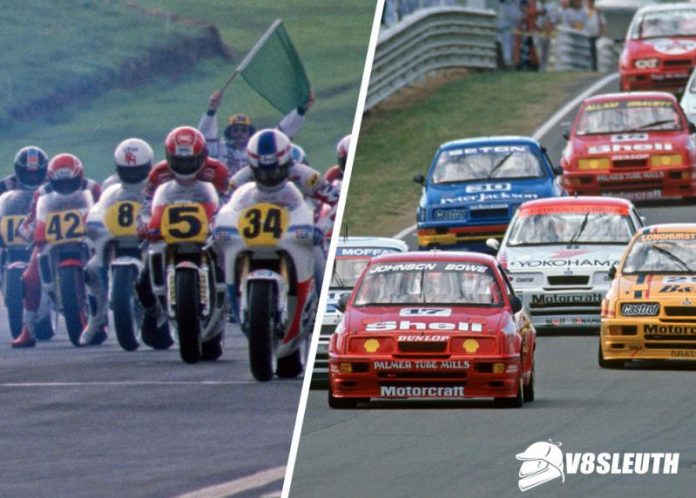 WHEN you think of the 1989 Australian Motorcycle Grand Prix, you immediately think of the euphoria around Wayne Gardner’s victory in the first world championship race to be held on his home soil.

It’s funny to think that of the 25 riders that lined up on the grid at the rebuilt Phillip Island that day – a field packed with riders now recognised among MotoGP’s greatest – five eventually raced or had test drives in Australian touring cars.

Race winner Gardner’s four-wheel conversion has been well covered, while polesitter Kevin Schwantz spent a couple of years racing a variety of machinery in Australia after calling time on his MotoGP career, including a handful of Supercars races.

He finished ninth in his 500cc debut at Phillip Island, made his touring car racing debut one week later, and finished on the podium at that year’s Bathurst 1000!

Michael Dowson was a contemporary of both Magee and Doohan in the formidable Marlboro Yamaha Dealer Team squad run by Warren Willing, but the 1989 Australian GP proved to be his only world championship 500cc grand prix start.

Dowson’s touring car debut came through the Toyota Star Search program. For 1989, the manufacturer chose eight promising young racers under the age of 30 with the aim of each getting a race in the second Toyota Team Australia Corolla. The prize for the two best performers was to race the car together at that year’s Bathurst 1000.

Dowson’s round in the Corolla came at Lakeside, originally scheduled for the week prior to Phillip Island but delayed by a fortnight when heavy rains left the circuit flooded.

His Australian Touring Car Championship debut was spectacular but brief.

Dowson outqualified teammate John Faulkner, but crashed in the warm-up and then tangled with Ford Sierra runner Ken Mathews through the kink in the early laps. Although the race was later red-flagged due to a fiery four-car crash and re-run, the #33 Corolla was too damaged to take part.

However, Dowson’s showing was enough for Toyota to select he and Bates for Bathurst, where the pair finished 17th outright and claimed victory in Class C, leading home teammates Faulkner and Peter McKay in a Toyota Team Australia one-two.

Dowson made just one more touring car start, rejoining TTA for Bathurst a year later. On the two-wheel front a disastrous switch from Yamaha to Kawasaki blunted his career’s momentum, and he retired at the end of 1993.

He remains the only racer to have competed in both the 500cc/MotoGP Australian Motorcycle Grand Prix and the Bathurst 1000 in the same year.