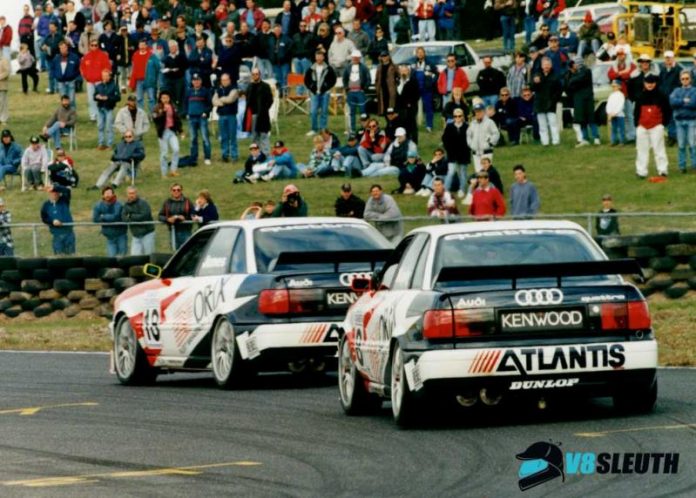 THE ever-growing V8 Sleuth car history database continues to expand with the histories of the Audi 80 and A4 Super Tourers campaigned by Brad Jones Racing in Australia between 1995 and 1999 being added to the site.

Earlier in the year V8 Sleuth confirmed a partnership with English-based website Super Touring Register, with the addition of two-litre Super Tourers that competed in Australia to the V8 Sleuth website to unfold over upcoming months.

The addition of the BJR-run Audis follows a recent trip to Albury by V8 Sleuth MD Aaron Noonan, who, with the full support and assistance of Brad and Kim Jones and their team, spent time sifting through the outfit’s records relating to its two-litre German racers.

His work has now solidified the full racing history of the Audis run by the team in the two-litre category, with which it won the Driver’s Championship with Jones in both 1996 and 1998.

BJR retains one of the four-wheel-drive A4s – driven by McConville in 1997 – in the National Motor Racing Museum at Mount Panorama, Bathurst, as well as a spare, ex-BTCC A4 front-wheel-drive chassis that it never ended up racing.

“Spending a day digging through the paperwork within the expandable files in the storage room at BJR made the hours in the day simply fly by – there was so much interesting reading to be done!” says V8 Sleuth’s Aaron Noonan of his Albury trip.

“There were countless faxes between Albury and Germany as the team looked ahead to order its parts for upcoming races, reports and run sheets on testing and racing and all sorts of gold in between.

“What Brad and Kim and their team achieved with these cars is simply phenomenal and it’s amazing to think it’s now over 20 years ago since their relationship with Audi began in 1995.

“We’ll continue to add the histories of these cars to the website early in the New Year. By our count there are 10 BJR-run Audis for us to add to the site and there’s a few of those that no one seems to know where they are today.

“So, over time, we intend to keep our lines of communication with overseas open and see what we can discover on the locations of these cars.

“BJR’s Audis were race winners in every single season they competed and finished on the podium in the two AMP Bathurst 1000 races at Mount Panorama, as well as taking Biela and Jones to a 1-2 in Macau in 1996 – which was a magnificent achievement and didn’t go unnoticed by Germany.

“Adding the histories of these Super Tourers is all part of our mission of collecting, collating and preserving Australian motorsport history – to have Brad and Kim’s support in this is much appreciated.”

BJR is just one of a range of prominent Australian motorsport teams that have endorsed the V8 Sleuth website since its launch back in 2012.

The site houses the racing histories of all of the team’s V8 Supercar race cars, from the first ex-Longhurst Falcon AU it acquired in late 1999 right through to the current Supercar-era Commodores it now races.

The team is building two new chassis for Nick Percat and Tim Slade for the 2018 championship.

Each will be paneled in ZB bodywork while Tim Blanchard’s new-for-Bathurst chassis (BJR 009) will be converted to ZB specification over the off-season.