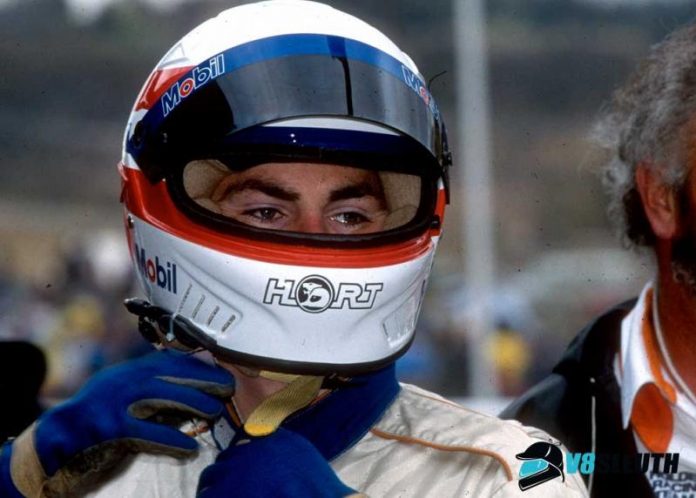 Craig Lowndes rocketed onto the Aussie motorsport radar when he nearly won Bathurst at his first attempt. But the helmet he wore on that history-making day has been missing for over 20 years …

SEVEN-time Bathurst 1000 winner Craig Lowndes is missing a crucial piece of memorabilia from his collection – and the V8 Sleuth team is determined to try and get it back.

The helmet that Lowndes wore in his Bathurst 1000 debut with the Holden Racing Team on the day he passed John Bowe for the lead – around the outside at Griffins Bend no less – was stolen not long after, and has never been seen again.

Predominately white, with red stripes to the side and small Mobil and HRT stickers, the helmet was worn by Lowndes in the 1994 ‘Great Race’ and would hold a significant value to a collector, but even more to Lowndes himself.

And that’s got us up and about on the hunt …

“It was actually stolen out of my Dad’s ute when I had borrowed it to go to the gym,” Lowndes told V8 Sleuth this week.

“Someone broke in and took it with them. It wasn’t all that long after Bathurst ’94. I’ve never seen it again or even had any leads on where it may have gone.

“Perhaps someone has it tucked away in their cupboard, perhaps it’s been on-sold via various people and whoever has it now doesn’t know of it originally being stolen.

“Whatever the case, it’s a helmet I would really like to have back in my collection being my first Bathurst 1000 helmet.

“I still get people come up to me and ask me about that race, so given it’s 25 years on I guess it made a real impression on so many fans.

“I’d like to think if there’s anyone out there that has it or knows where it is, this is the time to step up and do the right thing and give it back.”

If you have any information on the whereabouts of Lowndes’ 1994 Bathurst helmet, contact the V8 Sleuth team via our website here or call our office, 03 9585 1981.