Home News THE STORY BEHIND THE JAPANESE COMMODORE 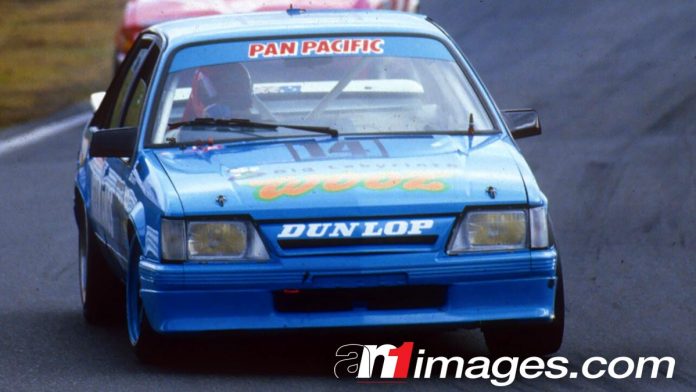 SOME interesting things come past us here at V8 Sleuth, and one such thing is the image currently doing the rounds on social media of a Holden Commodore racing in Japan.

Here is the image recently posted by Matt Wood on Twitter:

We’re across the car, the event, and how it got there in the first place – in fact, Noonz wrote about it in his first column for Australian Muscle Car Magazine back in 2014!

The photo at the top of the story is of the car racing at Japan’s round of the inaugural World Touring Car Championship in 1987, and is one of many in our upcoming limited-edition book Racing the Lion, a 400-page illustrated history of Holden in motorsport.

Packed with photos never before published, it’s the perfect collector’s piece and can be pre-ordered here.

The car in question is an ex-Holden Dealer Team VK Group A SS Commodore, and is one of the cars built by the squad for its European Touring Car Championship campaign in 1986.

Two new cars were built side-by-side in late 1985, then shipped over to Europe in advance of the season.

This car was #5 entry for Peter Brock and Allan Moffat in the early rounds of the ETCC at Monza, Donington and Hockenheim before becoming the #6 entry for the Spa 24 Hour, where it featured an all-Kiwi driver lineup of Kent Baigent, Graeme Bowkett and Neal Lowe.

The Belgian race marked the end of the HDT’s ETCC campaign, and while the Brock/Moffat/John Harvey Spa 24 Hour car initially remained in Europe, this car was sent to Japan for the Inter TEC 5 Hour touring car race at Fuji in November.

Brock and Moffat qualified the car sixth but retired just past the halfway point of the race while running inside the top five.

After the race, the car was purchased by local real estate millionaire and racing patron Yasuo Ishimura.

So far as we can find, the car only did two more top-level touring car races in the All Japan Touring Car Championship, both in 1987.

Ishimura and Masahiro Kimoto raced the car in the second round of the AJTCC at Sendai Hi-Land Raceway and the pair combined again at Fuji’s Inter TEC 500 that November, a race that served as the final round of the inaugural WTCC.

The car was supposed to have a third driver, motorsport journalist Mutsumi Kumagai; it’s a scan of his story for Japan’s AUTO SPORT magazine that is doing the rounds on social media, Kumagai missing out on setting a time fast enough to qualify himself to drive in the race when mechanical problems struck after he’d done just two laps.

The former HDT car’s lineage is clear by its wheels, along with its original Holden lion/Australian flag decal on the rear spoiler and Australian flag on the roof! According to our sources when the AMC story ran back in 2014, the car remained in Japan which, to our knowledge, is where it remains today.