Home News THE SUPERCAR SANDMAN ON THE MARKET! 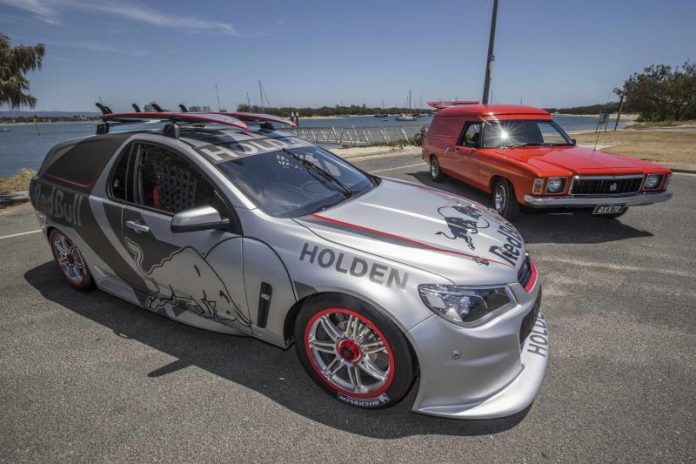 A Whincup race winner, driven by all of the stars!

The only car of its kind in existence, it has been Triple Eight’s lead promotional and ride vehicle since it was unveiled and debuted at the 2014 Gold Coast 600, four years ago this week in fact!

Paying homage to the iconic Holden Sandmans of the 1970s, the Sandman has been driven by a range of superstar drivers, including Triple Eight’s Supercar stars and even Red Bull Formula 1 ace Daniel Ricciardo, who drove it at Sandown on a promo day in 2016.

The Sandman also has been used in more recent times for testing of the now-shelved V6 turbo engine project – though the mighty V8 it’s best known for has been returned to the engine bay.

The Sandman also features a paddle shift arrangement with its Albins ST-6 transaxle gearbox and a fly-by-wire throttle.

In his hands it won eight races at Pukekohe, Barbagallo, Texas, Hidden Valley and Ipswich before making its last race start at Winton that year, the season in which he claimed his fifth Supercars Championship.

If you’re keen to know more, message us here …

Join here to get access to over 450 individual race car histories with a heavy focus on V8 Supercars from the early 1990s to today.