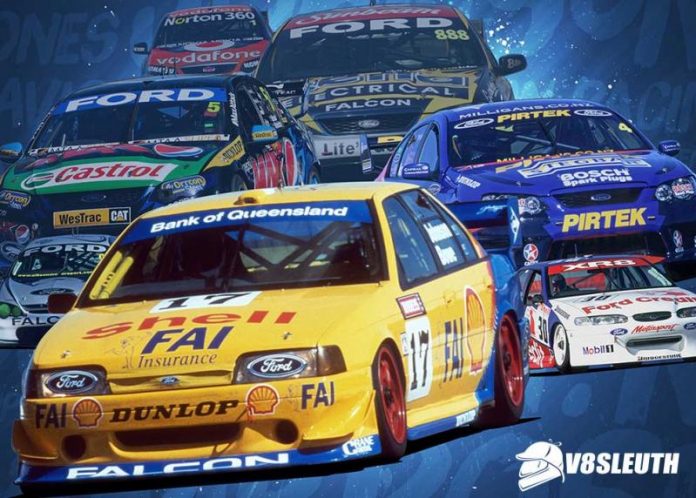 COMING this October, the V8 Sleuth team is proud to announce its latest publication, ‘The Falcon Files’, a limited collector’s edition magazine detailing the history of every Falcon V8 Supercar ever built over the last quarter of a century.

Don’t miss out; pre-order your copy of this limited print run here now.

From Glenn Seton’s Peter Jackson Racing EB that debuted at the 1992 Sandown 500 through to the EF, EL, AU, BA, BF, FG and current FG X models raced by Prodrive and DJR Team Penske, every car is covered with a range of previously-never-before-published photos bringing these car histories to life.

The Falcon Files dives into the history of some of Australia’s most celebrated and successful racecars including championship and Bathurst-winning Fords.

With 240 pages detailing the racing histories of over 150 Falcons, this perfect bound magazine features the histories of every Falcon V8 Supercar, including test and prototype cars that never raced.

This special edition collector’s magazine is a must for lovers of all things Ford.

V8 Supercars history expert and head of V8 Sleuth, Aaron Noonan has created this collectors edition that features the history of one of Australia’s most successful racing nameplates.

Hot off the back of V8 Sleuth’s recently-released ‘HRT The Cars’ collector’s book and just in time for Bathurst, this is a real treat for Ford fans.

Grab a copy of The Falcon Files ($25 plus postage) and you’ll be able to see which cars were upgraded to newer models, sold to privateer teams, are still running or ended their time on the scrap heap.

These are the cars that waged war against the General, forming the backbone of Australian motorsport for the past two and a half decades.

Don’t miss out; pre-order your copy of this limited print run here now.