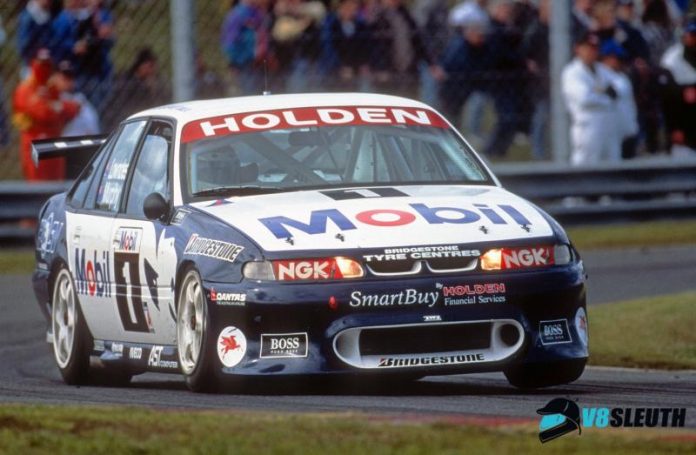 We farewell the Aussie Commodore with our list of the greats …

THIS week we bid a fond farewell to locally-manufactured Holden Commodores.

The Commodore has represented Holden in motorsport since the late 1970s and is the only car with a continuous competition presence spanning Group C, Group A, 5-Litre touring cars and Supercars.

To mark the passing of a great Australian icon of the racetrack, the V8 Sleuth team locked horns to come up with our list of the top five racing Commodores.

This was no easy task and could easily have been a Top 20 – what do you think of what we came up with?

The car which created the legend of the Holden Racing Team and Craig Lowndes, sweeping both to the 1996 ATCC title and taking Sandown 500 and Bathurst 1000 crowns with Greg Murphy.

The term ‘Supercar’ was first used to describe this very car. Created as an engineering clean sheet, HRT 033 pushed the technical envelope in every direction.

Peter Brock led home the Marlboro HDT Commodores to claim a dominant podium lock-out and give the Commodore its first competition win.

Brock considered this victory the greatest achievement of his stellar career.

Everyone loves the Big Banger.

Its time with us was brief, yet long enough to claim an inaugural Sandown 500 victory for Brock and Larry Perkins and a stunning 1-2 form-finish for the HDT at Bathurst.

One of the best ‘against the odds’ Bathurst stories ever.

An early pit stop to replace a flat tyre after a touch on the run to the first corner sent the Castrol Commodore of Larry Perkins and Russell Ingall to the rear of the 1995 Bathurst field.

It took the duo 44 laps to break back into the top 10 and 119 laps to crack the top five. They took the lead with just nine laps remaining to record an amazing, if not unlikely win.

Do you have a favourite Commodore that didn’t make our list? There’s plenty to choose from.