Home News THE WORST CAR I EVER DROVE-CAM MCCONVILLE 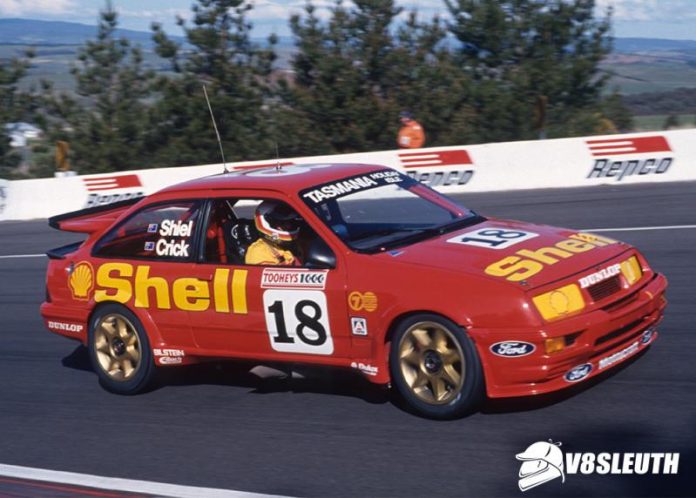 They may have been fast and successful, but the Ford Sierra was a real handful!

EVERYONE has driven a car that has left them with less than fond memories, maybe you didn’t like its performance, how it handled, or maybe you just couldn’t stand that awful beige leather that didn’t quite work with the wood grain dash?

Racing drivers are no different and they too hold memories of circuit specials and track-bred beasts that weren’t quite to their liking.

Cameron McConville recently dropped by the V8 Sleuth office and recounted his less than stellar time behind the wheel of a Ford Sierra in 1992.

“I’d say that the worst and scariest race car I’ve ever driven would be the Sierra,” McConville told V8 Sleuth.

“It was a car I was absolutely petrified of because it had such a huge turbo lag and it was massively under tyred and under braked.”

McConville first drove a Sierra at Lakeside in 1992 as a result of winning the Australian Formula Ford Championship the same year (he was also the youngest ever winner of the series).

The-then 18-year-old was put behind the wheel of one of Dick Johnson Racing’s Shell Sierras, however the opportunity was short-lived.

“The first time I’d ever driven it was at the test day and I as I drove down the pit lane it bucketed down with rain and I drove around in fifth gear for three laps and came back in,” he recalls.

The youngster still impressed Johnson and was signed as a reserve driver for the Bathurst-winning team, cutting practice laps at the 1992 October classic alongside car #18 main drivers Terry Shiel and Greg Crick.

McConville very nearly made a start in the race before heavy rain at the tail end of the event changed the team plans.

“Ross Stone (then DJR team manager) was going to put me in for the last stint, but the rain came and it didn’t eventuate. I was actually quite grateful.

“I remember hardly sleeping all week thinking that I don’t think I can drive this car.

“You’d go down Conrod Straight and in sixth (gear) over the rise the tacho would actually bounce against the stopper because the car would get light. I remember my feet coming off the floor of the car each time.”

While McConville lists the Sierra as the worst race car he’s ever driven, the 44-year-old says he gained a lot of respect for both the car and people who steered them.

“The car rolled around a lot and had hardly any aero, it felt like a road car on steroids. But then someone like (John) Bowe, who was one of the best drivers of those cars in the world, he used to love that sort of stuff and really get up on the wheel and hustle it.

“I just had massive respect for it whilst being petrified of it.”

And when pressed about what the former Bathurst 24 Hour winner learned from driving the Sierra?

“I learned to not rush back into one,” he laughs.

We’ll be catching up with plenty more Australian motorsport identities over the course of the year here on the V8 Sleuth website as they recount their best and worst race cars.