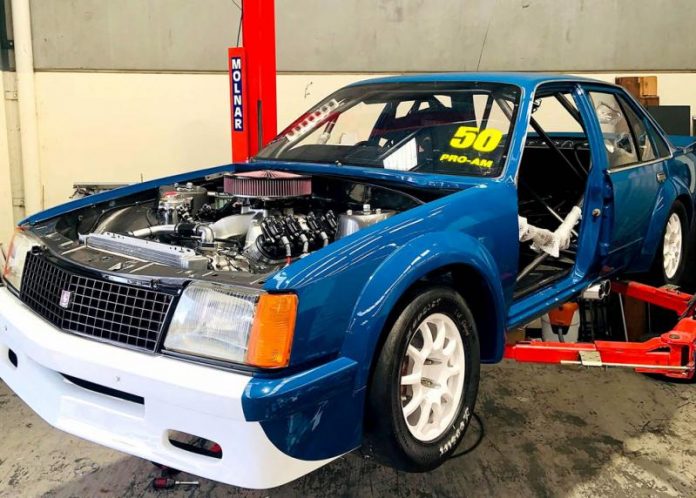 THE son of a Bathurst winner is set to be part of the Holden Commodore’s arrival in Touring Car Masters.

Gerard McLeod will pilot a Lucas Dumbrell Motorsport-run VB Commodore in the 2020 series, the machine set to carry a livery reminiscent of his Bathurst 1000-winning father Peter’s Group A Commodore from the mid-1980s.

The car has been built over the past year at LDM’s Dandenong headquarters, the basis formed by a one-owner donor chassis purchased from country Victoria in 2019, and will run the Chevrolet LS-based TCM ‘category engine’ V8.

“The design brief was to make a very simple, very reliable but well-thought-out car,” McLeod said.

“We believe the Commodore platform will be very competitive in Touring Car Masters and we’re looking forward to getting it on track. I got in touch with the category four years ago saying that if they ever introduced a Commodore that we would be the first to commit to running one, and I’m proud that we’ve reached this point of getting the car on track.

“The car is owned by Lucas Dumbrell and I’ve done the build over the last year. We’ve drawn on all the experience from the industry that we could find and tapped into a lot of resources including people with experience from Supercars and beyond.

“Tony Freeman of Kelly Racing built the engine in-house, (TCM competitor) Gary O’Brien did the bodywork and it looks incredible. It’s been built to a very high standard. We could have had it finished earlier but we didn’t want to rush it. We wanted it right.

“Running the category engine was a case of making it feasible to actually do. Aside from being a potent little engine due to weight,  it will be very torquey and will do two years without being unbolted from the car.

“We weren’t going to build the car with an $80,000 engine and it ticked last box for us to go ahead, it was at that point we committed to see it through to the end.”

This year’s TCM season sees the racetrack rivalry between Commodores and Falcons resume, with McLeod’s Commodore set to be joined by another example for the model’s debut in the category at Adelaide, where Steven Johnson’s long-awaited Team Johnson XD Falcon will also line up for its maiden race.

The opening round of the 2020 Gulf Western Oil Touring Car Masters series will see the category tackle four races across the Superloop Adelaide 500 weekend.

Qualifying and all races will be shown live on FOX SPORTS 506 with selected raced also live on Channel 10.

The full entry list for the opening round will be released on Friday.