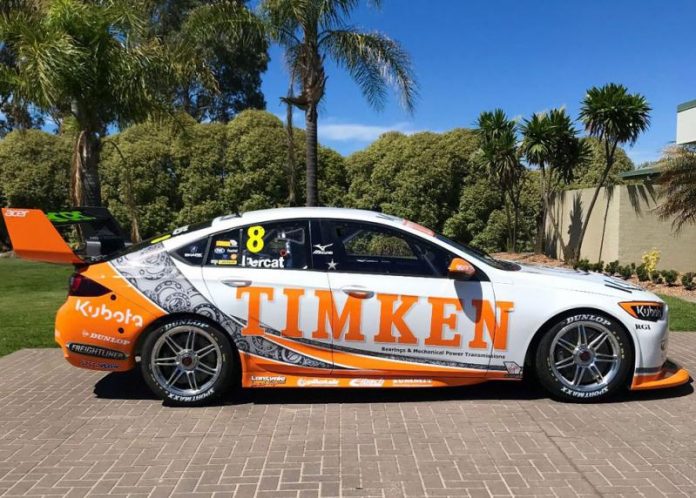 TIMKEN will return to the flanks of Nick Percat's Brad Jones Racing Holden at this weekend's Newcastle 500.

It marks the third year in a row that the world-leading manufacturer of bearings and mechanical power transmission products has featured on the #8 Commodore at the Supercars season finale.

Following a bright orange in 2017 and a metallic orange last year, Percat's 2019 Newcastle car will carry a white and orange livery.

“We believe the (Newcastle) event is a great way to promote our brand,” Michael Pearson, managing director of Timken Australia and ASEAN said.

“Motorsport has been a huge part of the development of our Bearings all over the world so it’s great to be able to support the industry.

“We’ve been proud to support the team this year and we’re looking forward to watching Nick have a strong finish to the season in front of a large crowd at Newcastle.”

For Percat, whose best result in Newcastle is a sixth place finish in 2017's Sunday race, the season finale represents an opportunity to make a major move up the final points standings.

Currently sitting 10th in the championship, only 89 points separates Percat from seventh-placed Cameron Waters with a maximum haul of 300 points on offer across the weekend's two races.

Brad Jones Racing is also engaged in a battle for sixth place in the Teams Championship standings with Walkinshaw Andretti United.

“There’s still a lot on the line this weekend,” Percat said.

“Everyone is looking at who they need to finish ahead of in the fight for those positions. I’m happy where I’m sitting but I’m not done yet.

“It’s fantastic to have Timken on board again for the finale. We’ve done a lot of work together with Michael and the Timken team and they love the experience and interaction with BJR.

“Timken are passionate about motorsport and I know they’ll be cheering us home for a strong finish this weekend.”