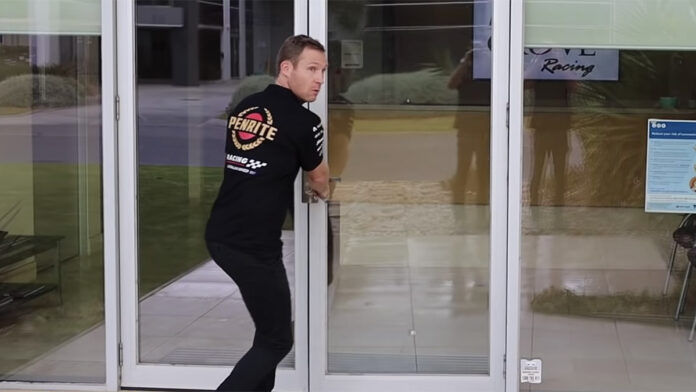 For April Fools’ Day, we thought we’d share some of the favourite pranks on rivals executed by some of the Tasman region’s top steerers.

An obvious place to start is David Reynolds.

The 2017 Bathurst 1000 winner returned to Kelly Grove Racing this year for his second stint with the team – something that is especially surprising given a prank he pulled on his boss during his first run with the team in 2011.

“Absolutely everything. Desk, books, computer, seat … everything that was in his office got TP’d.

“Floor to ceiling, it was ace. It was like a white-out in there. It took me a long time.

“I think he got back from holidays that day, and he came into his office and it was just a shit-fight.

“And he knew who it was that did it…”

Not that Reynolds was always on the ‘giving’ end of pranks.

“There was one with David Reynolds when we were Formula Ford teammates at Sonic,” CoolDrive Racing team owner Tim Blanchard said.

“He was in the local paper, the Border Mail in Albury. It wasn’t a great photo of him, so I blew it up and hung it up in the workshop.

“He didn’t find it funny – but the team sure did!”

In 1999, the now-Tickford Racing pilot was in his first year of British Formula Ford and racing for the factory Van Diemen team alongside promising Irish star Neil Shanahan, who tragically died mid-way through the season in a crash at Oulton Park.

“We were always pranking each other,” Courtney said.

“At Brands Hatch I went to the Avon guys – the tyre supplier for us in Formula Ford – and got a heap of wheel weights.

“I waited to leave the track so he’d leave before me so I could catch him and see what it was like.

“He pulled over on the side of the road and was looking all under the car.

“So I followed him and it was hilarious – he drove all the way from Brands back to Van Diemen’s base at Snetterton.

“Normally it doesn’t take that long but it took him 2.5 hours!”

Of course, Courtney himself has become an easy target due to his exceptionally strong aversion to a particular fruit.

“We definitely put a banana peel in James Courtney’s helmet once,” Lee Holdsworth recalled from his sole year with what was then known as Walkinshaw Racing in 2015.

“He throws up at the sight or smell of bananas, so he was pretty easy to get.”

As well-known as Courtney’s revulsion towards bananas has become, some teammates still needed to see the evidence first hand.

“I wanted to test that (bananaphobia) theory,” Scott Pye laughed.

“The first round I was teammates with James Courtney, I came running into the truck with a banana and filmed it because I just didn’t believe it was as serious as (I’d heard) it was.

“He almost vomited and sprinted out of the A-trailer.

“I think it was at that point I realised it was for real – still made for a funny video!”

“We used to have these chairs in the truck, like a camping-style chair,” Mark Winterbottom said, recalling a prank from his time at Tickford Racing.

“There was one that the seat would just fall out of when you’d sit in it.

“We played it on a few people; we got Steve Owen – he’s probably the most unemotional person you’ve ever seen, and we got a bit of a reaction out of him!”

Phones can also be a good target, especially when left to fall into the wrong hands.

“We used to have a bit of fun in the Formula Ford days as 16-17 year old kids,” Anton De Pasquale said.

“Me and my teammate played a prank on our other teammate: on his phone, we changed my name to his girlfriend’s name, and I just started texting him – naturally, we put the phone tactically in eyesight.

Phones can also be handy if you have an uncanny knack for impersonating your team boss’s distinctive voice.

“I’ve done lots of stuff with Holdsworth because he was my teammate for so long (at Garry Rogers Motorsport),” Michael Caruso said.

“One weekend he didn’t go too good … I can put on a pretty good Garry voice, so I rang him up as Garry.

“He caught on eventually because I was being a bit of a smartarse, but it went for a while, which was good!”

We’ll leave the last word to the current Repco Supercars Championship points leader with a story from his days racing Formula Vee in New Zealand.

“We got one in the morning going to the track and I stole it. He was going crazy trying to find it, not happy.

“In the morning warm-up, going down the back straight, I pulled out the chocolate bar, waved it and threw it at him!”