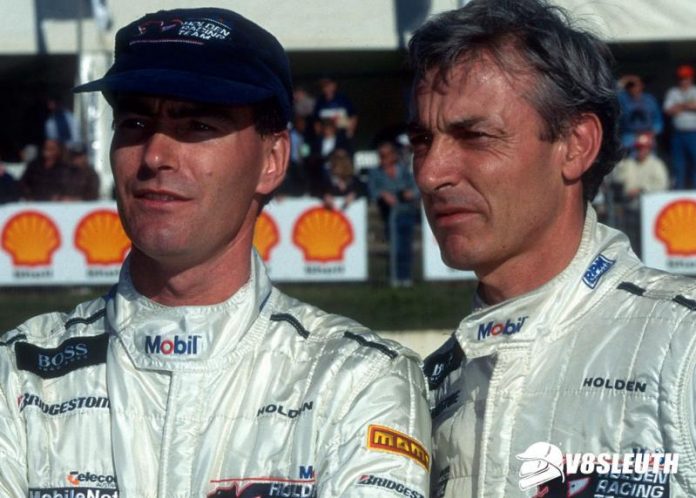 OVER the years a huge number of drivers have had the honour of representing the factory Holden team in the Bathurst endurance classic.

But who has had this honour more times than any other driver?

1. Peter Brock – 20 starts
No real surprise this one! The ‘King of the Mountain’ had 20 Holden factory starts of his 32 Great Race campaigns over the years, beginning with his first visit in 1969 in a Holden Dealer Team Monaro GTS 350 and ending in 2004 in a Holden Racing Team Commodore VY.

After a few years running privateer Toranas in the mid-1970s, Brock returned to the factory fold in 1978 and ran in factory cars all the way through to 1986 before his departure from Holden.

Returning with the Holden Racing Team in 1994, Brock made four Bathurst appearances with the Tom Walkinshaw-owned squad through to his retirement from full-time V8 Supercar racing in 1997 – the 2004 endurance return a ‘factory full stop’ on his Bathurst career.

2. Mark Skaife – 12 starts
A relentless competitor, Mark Skaife arrived at Bathurst in a factory Holden in 1997 as Peter Brock’s HRT co-driver in a bid to send the legend out with his 10th Bathurst victory.

His last factory appearance came in 2008 in his last Bathurst with the HRT, later returning as a co-driver for Tasman Motorsport and Triple Eight.

3. John Harvey – 11 starts
Often merely referred to as Brock’s sidekick at the Holden Dealer Team during the late 1970s and early to mid 1980s, Harvey remains one of the finest all-round racing talents this country has ever produced.

A winner and survivor of the heady speedways of Sydney in the 1960s, Harvey made the switch to bitumen and never looked back.

His first Bathurst appearance with the Holden Dealer Team came alongside Colin Bond in 1976 and they finished second with all 11 of Harvey’s Holden factory Bathurst starts coming in succession through to 1986.

He’d return to the podium in 1982 in third place alongside Gary Scott and go one better the following year in the #25 HDT Commodore, which was taken over by Peter Brock at the first pit stop and subsequently shared with Larry Perkins under the ‘cross-entering’ rules of the day to victory.

That left Harvey with four podium finishes in his last five Bathurst starts in HDT Commodores, an impressive statistic from one of the sport’s true gentlemen.

4. Garth Tander – 10 starts
The lanky Western Australian’s first Bathurst in a factory Holden came under the unique ‘driver swaps’ of 2006 designed to protect he and Toll HSV Dealer Team teammate Rick Kelly from both being eliminated from championship contention should anything wrong occur at the Mountain.

Tander was moved from his regular Toll HSV car to share the #2 HRT entry with Mark Skaife, the duo sweeping to pole position before clutch failure took them out on the first lap.

‘GT’ returned as a factory pilot full-time with HRT in 2008 and clinched pole, going on to win the following year with Will Davison and again in 2011 with Nick Percat.

Third in 2010 with Cameron McConville and again in 2015 with Warren Luff gave him further Bathurst podium results in factory Commodores at the Mountain.

Tander has been to Bathurst in factory Holdens a total of 11 times but has only made 10 starts: he missed the 2014 race after co-driver Luff lost brakes and crashed in Saturday morning practice, the damage to their HRT Commodore too much to be fixed for race day.

However his surprise departure from Garry Rogers Motorsport at the start of 2019 opened the door for him to join Red Bull Holden Racing Team as Shane van Gisbergen’s co-driver at Bathurst, allowing him to add to his tally of factory Holden starts in ‘The Great Race’.

Bond’s 1969 Bathurst victory meant he won ‘The Great Race’ in his first attempt as a Holden factory driver, sharing a Monaro GTS 350 with Tony Roberts to victory.

His eight Holden factory starts came in a row from 1969 to 1976 before he departed to join Allan Moffat’s Ford team.

Czech immigrant Mezera was one half of the reigning Bathurst champions when he made his first Bathurst factory Holden start in 1989, having won the year prior in a Sierra with Tony Longhurst.

He and Larry Perkins finished sixth in ’89 and he’d return to the Holden Racing Team fold in 1992 as the team’s full-time driver, sharing a new winged Commodore VP with Brad Jones at Bathurst.

Bad luck afflicted Mezera in the following three HRT Bathurst campaigns with crashes eliminating his cars from contention in 1993 (with Win Percy) and 1994 (with Peter Brock) while he was not at the wheel, while in 1995 engine problems sidelined he and Brock just a lap into Mezera’s first stint.

Mezera lost his full-time HRT drive for 1996 to Craig Lowndes, however continued as Brock’s co-driver that year, finishing fifth at Bathurst.

In the case of Richards, his Holden factory career is sublime, scoring three victories with Peter Brock in 1978, 1979 and 1980 and another with Mark Skaife in 2002.

That’s a winning percentage of 50% driving factory Holdens in ‘The Great Race’!

After last driving for HDT at Bathurst alongside Brock in 1981, it wasn’t until the ’02 win with Skaife for HRT that Richards returned to pilot a factory Holden at the Mountain.

He ran with the team again in 2003, impressively qualifying third and finishing fifth with Tony Longhurst, before pairing up with young guns James Courtney and Ryan Briscoe for their respective first Bathursts in 2005 and 2006.