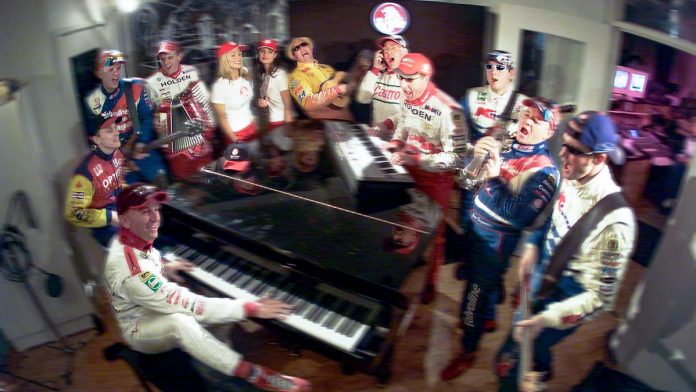 PLENTY of mainstream songs have been connected with Australian touring car racing over the years, either used in television broadcasts or in the category’s own marketing.

The latter has included deals with the likes of international pop sensation Pink and Aussie rocker Diesel, aimed to broaden the category’s appeal and reach.

But what about songs created specifically for the category? Ones with car parts used as instruments, cheesy lines about Bathurst and even featuring drivers in the video clip?

Well, V8 Sleuth’s Top Five segment is back to tackle this entertaining topic… unearthing a diverse bunch of tunes for your enjoyment.

Amid the noise of protests from a minority of locals ahead of the inaugural Newcastle 500 in 2017, it was easy to miss that the event had its own song!

Students and staff at the Newcastle Conservatorium of Music collaborated to produce this instrumental.

And yes, that engine with the rather large straight-out exhaust pipes is being used as a drum…

4) Super Black – Back in Black

When the now late Kiwi businessman Tony Lentino brought Super Black Racing to the grid in 2015, it soon became the first Supercars squad with its own theme song.

The song was co-written by Tony’s wife, Emme Lentino, who performed the tune in the above video clip and at the team’s official launch function in Adelaide ahead of the season.

Sadly, the team folded at the end of 2016 after Tony passed away mid-year.

In 2001, the Holden Motorsport PR machine rolled out this classic featuring its full cast of V8 Supercars drivers.

There’s so much to enjoy in this video that it’s hard to pick a highlight.

Larry Perkins is the surprise star performer – although we’re not sure he’s doing Russell Ingall any favours on that keyboard!

2) Heartbeat of a Nation

In 2000, V8 Supercars took a step away from licensing existing songs for its marketing and commissioned its own.

The catchy ‘Heartbeat of a Nation’ was used extensively over the next 18 months, boasting that “it’s pedal to the metal, foot to the floor, this is Aussie sport like you’ve never seen before”.

Adapted from Lee Kernaghan’s song ‘Boys from the Bush’ first released in 1992, this iconic V8 version was produced ahead of the ’93 Bathurst 1000.

With lines such as “We’re all heading to the Bathurst hill, to see Brocky and the boys serving up a thrill”, it became the race’s unofficial anthem.

It was used in the broadcast through 1995, while Kernaghan performed it live on the grid at Mount Panorama ahead of the Bathurst 1000 in 2008.