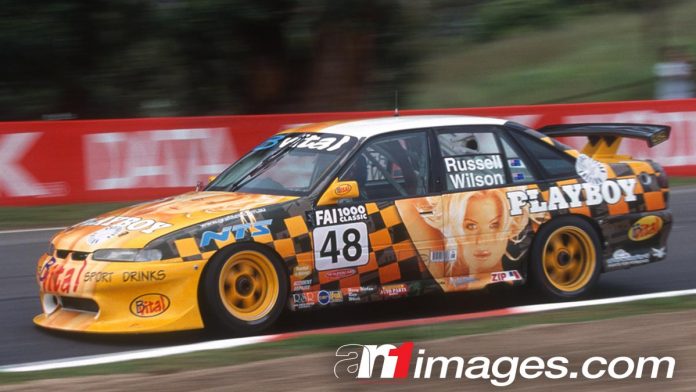 THE PRIVATEERS that filled the back half of the V8 Supercars grids in the 1990s and early 2000s didn’t have a lot of cash to splash on their racing.

But that didn’t prevent some from producing striking and memorable liveries, some with big-name sponsors… and others none at all!

In this week’s edition of the V8 Sleuth Top Five, we look back at five unforgettable privateer paint schemes from V8 Supercar history.

The look evolved over the years from its debut in 1994 but kept largely to the busy white-on-red ‘cross-hatch’ design, pictured here at Albert Park in ‘99.

When the new V8 rules were introduced in 1993, Pro-Duct proprietor Bob Pearson rolled out two immaculately presented VP Commodores for himself and Bruce Stewart.

Pearson continued to make occasional starts with the distinctive rainbow colours until the end of 1995, before a new car brought with it another unique look – a silver spider web on an all-black car.

After dabbling in the category the previous season, Tony Quinn’s growing VIP Petfoods empire made a bold statement with sponsorship of the McLean-driven Paragon Motorsport Ford in 2002.

The livery was used on various V8 Supercars in the years that followed, as the sponsorship moved between teams including Paul Morris Motorsport, Dick Johnson Racing and Tekno Autosports.

It’s fair to say this car captured more attention than your average privateer Commodore when it turned up at Bathurst in 1998!

D’Arcy Russell had competed with Playboy branding on the side of the Rod Smith Racing Commodore in that year’s ATCC, but this wrap effort stepped it up for the Great Race.

Privateer stalwarts Doulman and Cotter snagged Gatorade support towards the end of their time in the category, rolling out this spectacular look on their VS in 1999 before applying to a VT in 2000.

The sponsorship was the result of the team proving to the company that racing drivers are endurance athletes, as much as in other sports that the drinks company was backing.