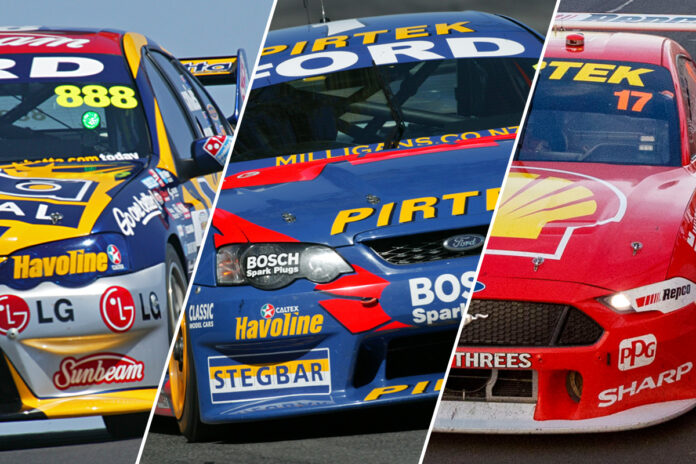 The likes of Dick Johnson Racing, Glenn Seton Racing, Stone Brothers Racing, Tickford Racing and Triple Eight (before its switch to Holden!) have all built their share of winning cars.

But how do their individual chassis rank against each other? Which is the winningest Ford Supercar of all, based on ATCC/Supercars Championship race victories?

Find out in our top five countdown, which features seven cars thanks to a three-way tie for fifth place…

Built in October 2019 to replace the chassis McLaughlin crashed at the Gold Coast 600, this Mustang clinched that year’s Supercars title for the Kiwi in its first outing at Sandown.

All 13 of the car’s Supercars Championship race wins though came in 2020, which included the season-opening Adelaide 500, as McLaughlin charged to a third-straight title.

It was retired from racing duties at the end of last season and remains at DJR.

Debuted by new Triple Eight signing Craig Lowndes at the start of 2005, this car’s first win at Eastern Creek that season was also the team’s first in Supercars.

Triple Eight retained the car following its racing life, restoring it to its 2006 Bathurst-winning glory.

This BF Falcon was debuted by Jamie Whincup at Barbagallo in 2008 after his previous car was heavily damaged at the Hamilton Street Circuit.

In just 11 round starts the car achieved 13 wins, including the 2008 Bathurst 1000 with Whincup and Lowndes, and helped the former to his maiden Supercars championship title.

It was later a winner in the Fujitsu Series with Jack Perkins while under the ownership of Rodney Jane, who was also among its second-tier pilots and retains the car today.

This car was built by Ford Performance Racing ahead of the 2014 season and driven to 14 wins by Mark Winterbottom across the three years that followed.

Four were scored as an FG in 2014, nine in Winterbottom’s title-winning 2015 campaign (including the Sandown 500 with Steve Owen) after being upgraded to an FG X, and one more in 2016.

This chassis is still racing, and winning, with the team today; it’s currently Zak Best’s Super2 mount after being driven by Thomas Randle and Broc Feeney in the last two second-tier seasons.

Built for McLaughlin when he joined the team in 2017, this car served as the Kiwi’s ride for the next two seasons.

The car and driver combination won eight races in 2017, including Race 2 on the Gold Coast with co-driver Alex Premat, before falling agonisingly short of the championship at the final round.

McLaughlin won nine races and the title in 2018. The car was immediately retired from active duties and has remained at DJR ever since.

The first Supercar from any team to be built new as a Mustang, rather than an upgraded Falcon, this is the chassis that McLaughlin used to dominate much of the 2019 Supercars Championship.

It won at 12 different circuits that year, including a double in Adelaide and a controversial victory in the Bathurst 1000, where McLaughlin was joined by Premat.

The car’s racing life ended in abrupt fashion when it was crashed by McLaughlin two weeks later on the Gold Coast, before being rebuilt at DJR ahead of a planned shipment to Penske’s museum in the US.

For all of McLaughlin and DJR’s success, this car remains the winningest Ford Supercar of all-time thanks to Marcos Ambrose’s efforts from 2003-2005.

Ambrose drove it to nine wins in 2003 and 11 in ’04 as he charged to back-to-back Supercars titles, before adding five more in ’05, including a second consecutive sweep of the Adelaide 500.

It was subsequently retained by Ross and Jim Stone and slowly restored to its 2004 colours before recently being sold to an undisclosed Sydney buyer.

The car is set to be displayed at a new museum at Muscle Car Warehouse in Sydney, ensuring it can be enjoyed by Fords fans for years to come.